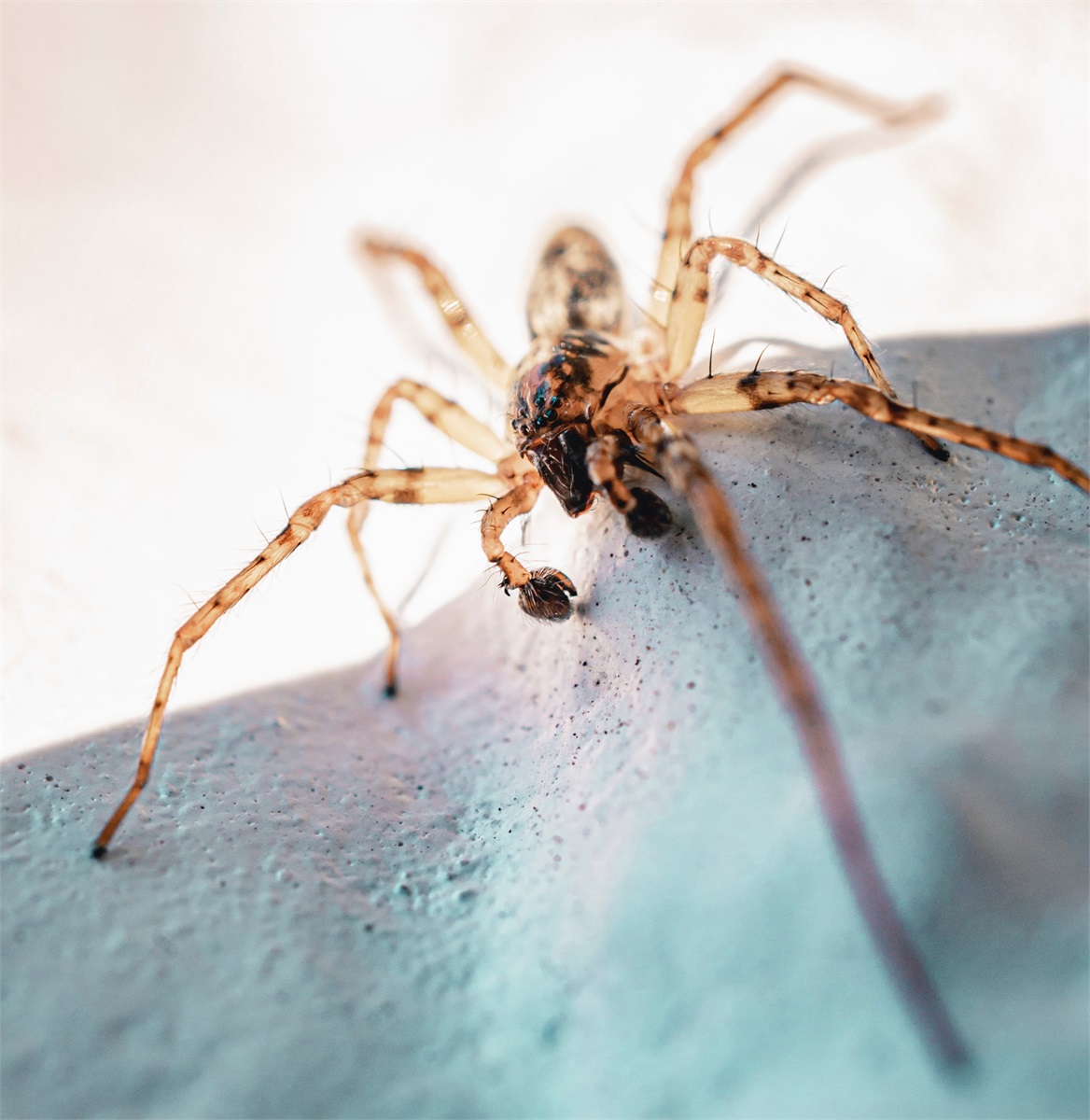 The Most Dangerous Investing Move You Can Make

I've written a lot this year about not bailing out of your portfolio during bad markets.  Whether it was 2008 or the biggest 30-day decline for stocks in history that we saw earlier this year (followed by a record-setting recovery), selling your investments and retreating to cash can be an extremely costly mistake.  But I don't believe panic selling is the worst mistake investors make.

Instead, I think performance chasing is a more dangerous problem; the effects are even more costly, and it's more common.  Big stock market declines only happen every few years, but there's always a part of the global capital market that is doing dramatically better than everything else.  There's always something to chase, and it rarely works out well.

Let's start with the largest stocks in the US market today: Facebook, Apple, Amazon, Microsoft, Alphabet (Google), or what I call the FAAMA stocks.  You can throw in Tesla as it's climbing the ranks too.  These seem like "can't miss" stocks, and investors are abandoning diversified portfolios en masse (or opting against diversification from the start) in favor of these high fliers.  Collectively, these stocks now account for about 25% of the US stock market!  So even if you are not going the individual stock route and putting all your assets in a US stock index like the S&P 500 or Vanguard Total Stock Index, you're chasing these stocks higher and higher.  What's wrong with that?

The graphic below looks at all of the top 10 largest stocks in the market, going back to the 1920s.  The list changes regularly as winners fall, and new firms ascend (just a few years ago, Exxon was the biggest stock but is no longer in the top 10), but we can track their returns before and after.  On the way up, the stocks that will eventually reach the top 10 have incredibly high returns: in the prior ten years, they outperform the market by +10% a year; in the preceding five years they beat the market by +19.3%, and outpace the market by +24.3% in the preceding three years.

But the outsized returns don't last. After reaching the market's peak, on average, the top stocks underperform the market by -1.1% over the next five years and -1.5% per year over the next ten years. Chasing yesterday's hot stocks is a recipe for lower returns. 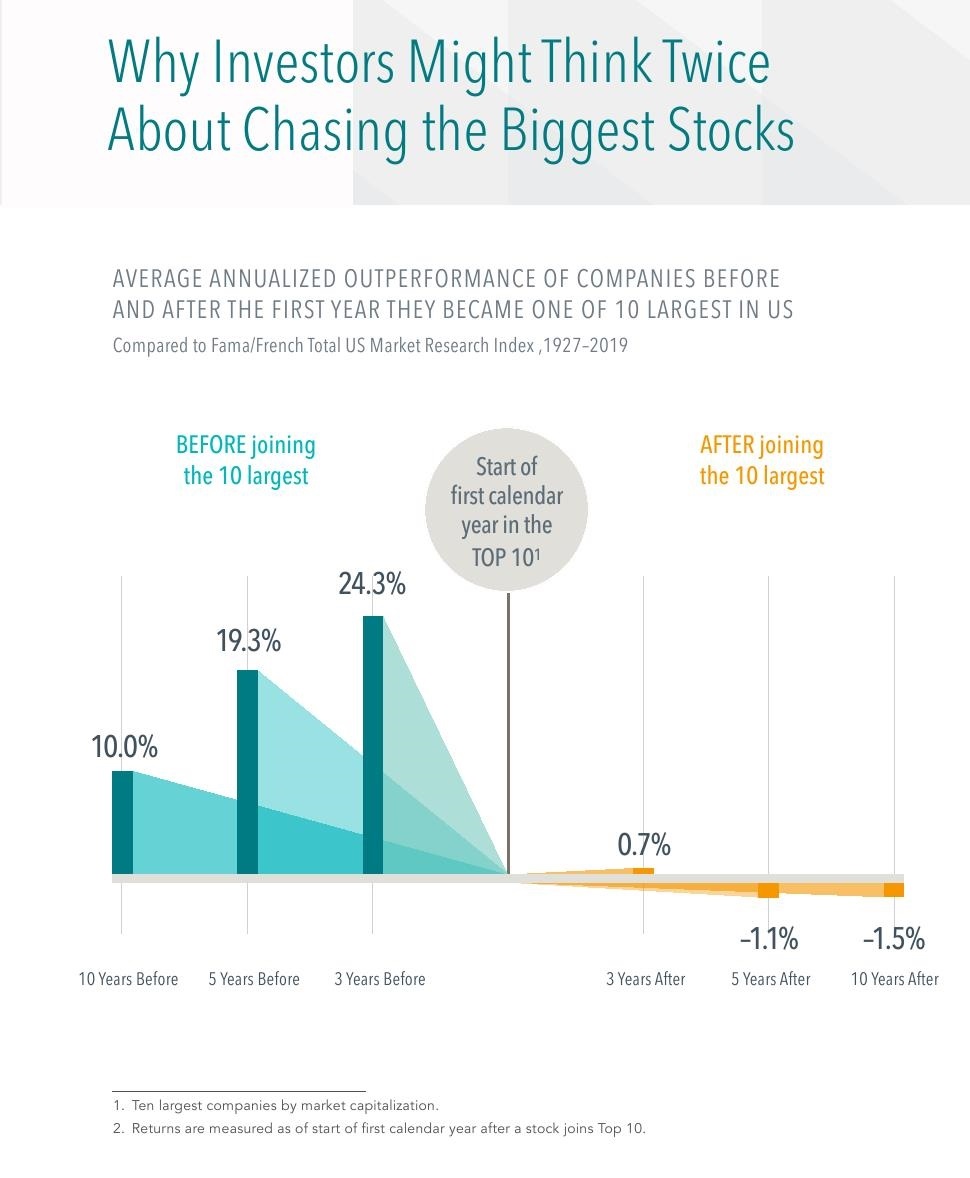 But the perils of performance chasing don't just show up at the individual stock level.  It's even more pronounced across asset classes.  When I first entered the financial advisory business in the 1990s, all anyone wanted to own was US large-cap growth/tech stocks after a strong run from 1995 to 1999.  In the late 2000s, after a surge in international and emerging markets, everyone wanted to shift more to overseas stocks.  Today, we're back to the 1990s mindset as investor dollars flow into S&P 500, Vanguard Total Stock Index, and Nasdaq Index funds.  Let's take a decade-by-decade look at how leadership changes from asset class to asset class, and how costly performance chasing can be.

What happened over the next ten years?  On the right side of the chart, we see the S&P 500, dominated by tech stocks, that performed best in the 1990s.  How about International Small Cap stocks?  They were the absolute worst. 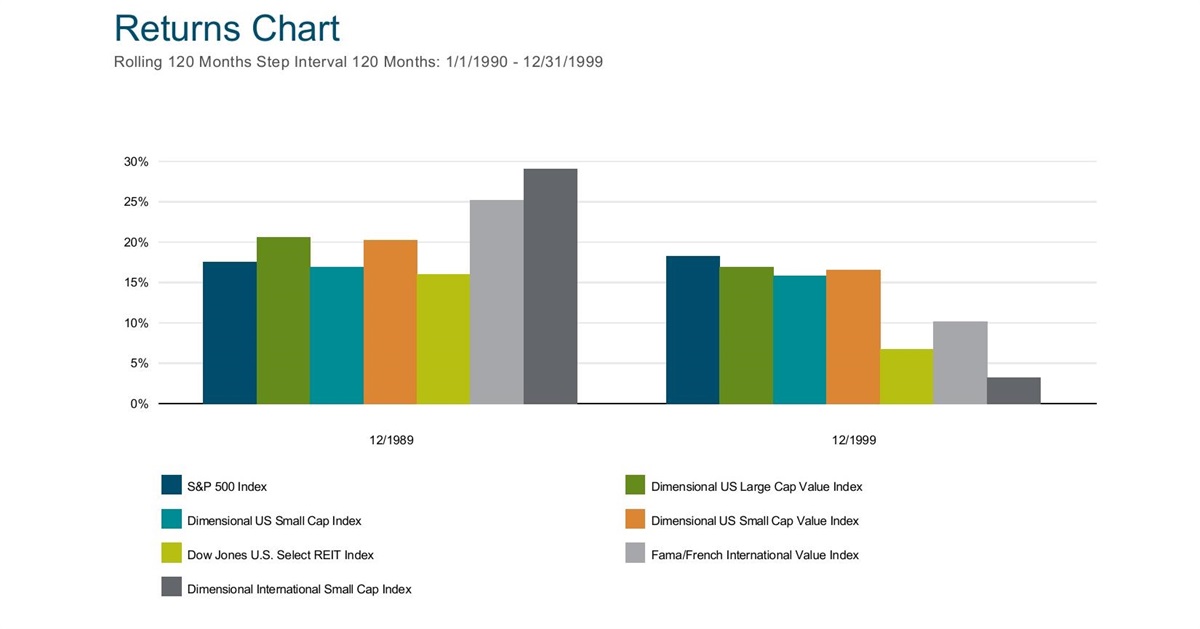 Next, we'll look at the decade of the 2000s.  The chart below is identical to the one above, except it contains additional asset classes with data that doesn't extend as far back--International Small Value, Emerging Markets Value, and Emerging Markets Small Cap.  The asset classes shown aren't random; they make up the Dimensional Equity Balanced Strategy Index (more on this diversified index later). This time, the chart covers the 1990-1999 and subsequent 2000-2009 periods.  As you can see, the S&P 500 is still the top performer in the 1990s, US Large-Cap Value is the second best, and International Small Cap is the worst.

What happens during the decade of the 2000s on the right side of the chart?  You guessed it--the best performer, the S&P 500, became the worst (followed by the 2nd worst performer, US Large Value), and International Small-Cap stocks did quite well, earning almost +10% per year. 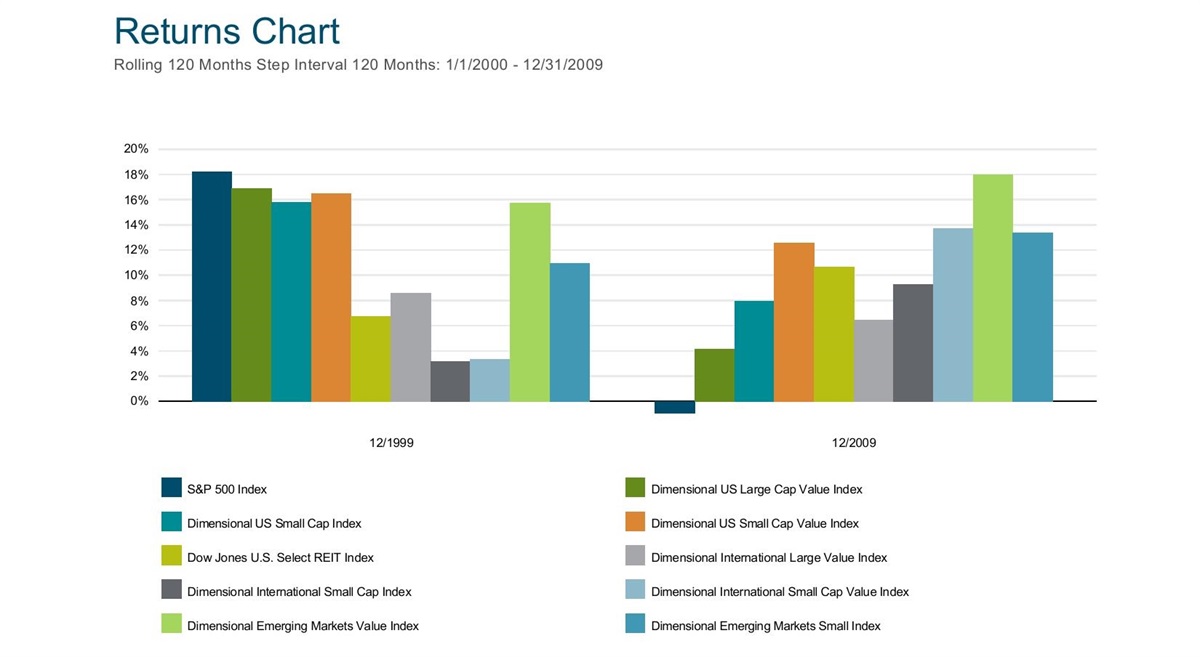 The chart below tells the story.  The left side, which is identical to the right side of the chart above (for reference), looks like a mirror image of the left side.  The 2000s worst performing asset class, the S&P 500, turns out to be the best.  The second best is US Large Value, the second-worst in the prior decade.  How about the best performer from the 2000s, Emerging Markets Value?  It's the worst. 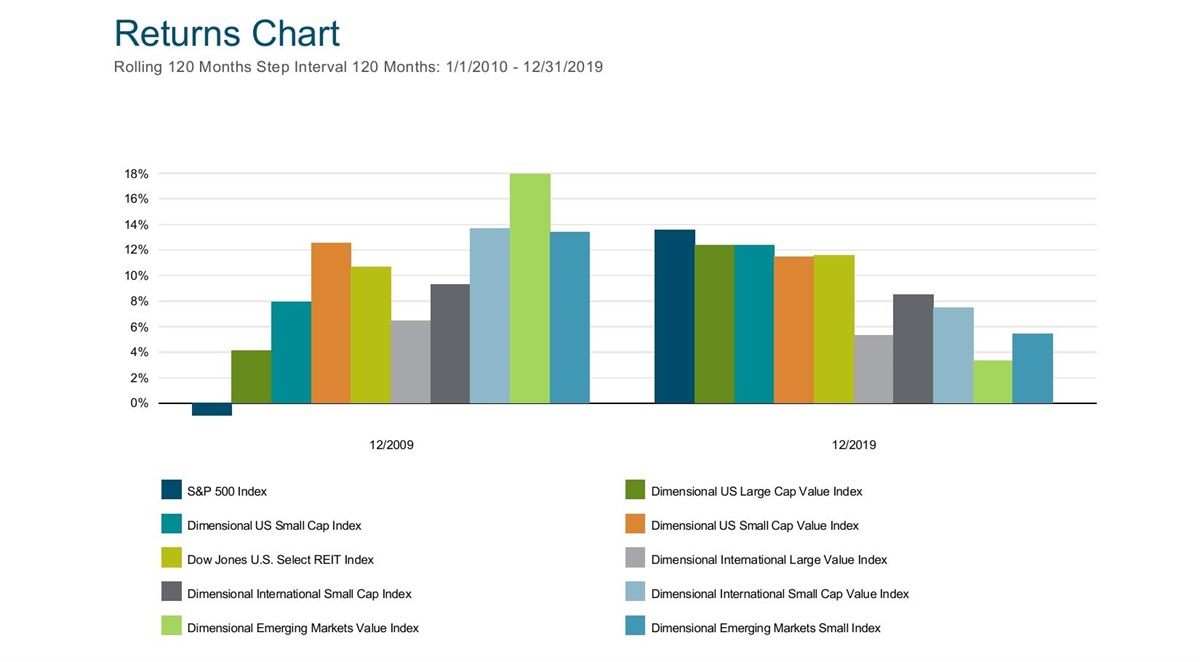 Performance Chasing: The Effect on Portfolios

How does asset class performance chasing affect long-term investment portfolios?  Let's assume you started investing in 1990 and decided to put all your funds into the best performing asset class from the prior ten years and then leave it alone for the decade.  In 1990 you bought Int'l Small-Cap stocks, in 2000 you bought the S&P 500, and in 2010 you bought Emerging Markets Value.  How would you have done?  How would you have compared to a contrarian who put all their money over the same periods in the worst performing asset class from the last decade?  Look at the chart below. 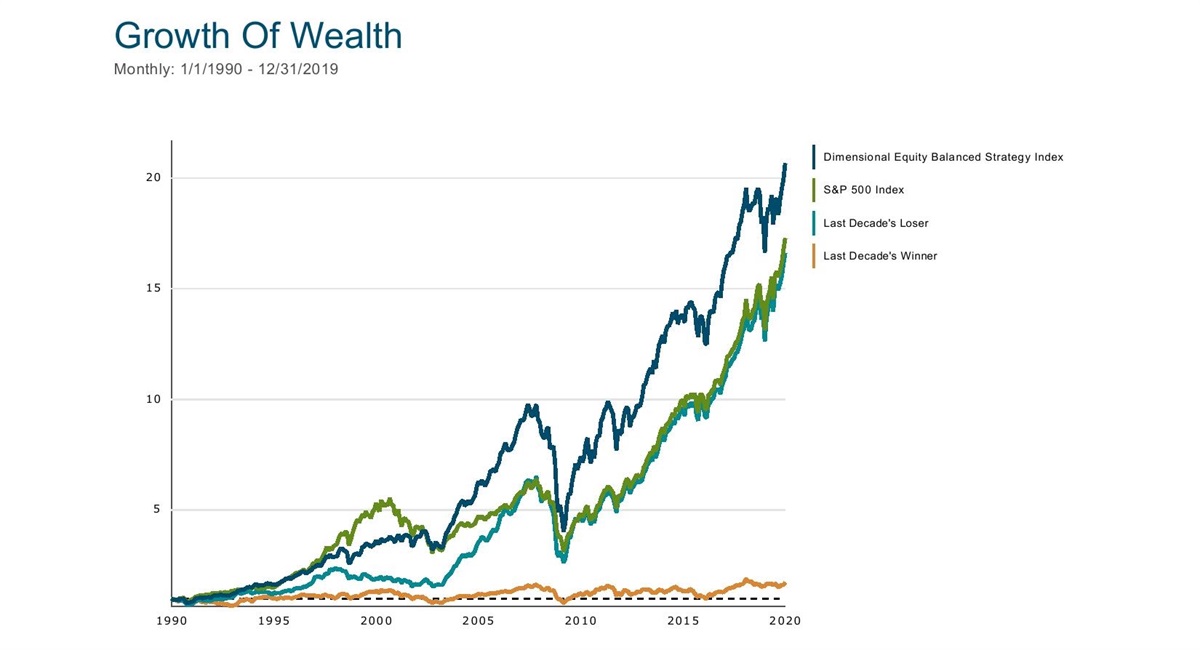 The performance chasing portfolio, "Last Decade's Winner," had almost no return during a 30-year period where the S&P 500 gained +10% a year -- in line with its historical average.  In this example, chasing performance costs you 8% a year compared to just buying and holding US Large-Cap stocks through a low-cost index.

If you were going to try and time the market, picking last decade's losers worked out far better.  The "Last Decade's Loser" portfolio returned +9.8% a year, no worse than the S&P 500.

The best return of all, however, was the Dimensional Equity Balanced Strategy Index, which was fully invested in 11 global asset classes shown (the ten shown plus Emerging Markets Large Cap) and rebalanced back to its target every month.  The whole was greater than its parts -- either the past winners or losers; especially surprising given that international stocks underperformed US shares over these three decades and the Dimensional index was 30% in developed and emerging markets.  You don't need to own only the winners to achieve a successful investment experience.

So what does this mean for today?  Clearly, after a strong run in the 2010s and a continuation in 2020, growth stocks and the S&P 500/Vanguard Total Stock Index funds are due for a break.  If history holds, these stocks/funds will be the worst-performing asset class during the 2020s, just like the 2000s.  This doesn't mean you should sell all of your S&P 500 or Total Stock Index Funds, of course.  But they shouldn't comprise more than 20% of your stock allocation.  After years of outperformance, you're probably overdue to rebalance into recent laggards: US Small Value, International, and Emerging Markets.

If you don't own these asset classes, then you've got even more work to do -- learning about and figuring out how to design and manage a globally diversified, small/value balanced stock portfolio.  The sooner you do, the sooner you avoid the risk of a "Lost Decade" for US Large Cap and growth stocks.

What if you don't know how to diversify your portfolio more broadly, or find it challenging to stay the course and avoid performance chasing?  Congrats, you're in good company.  Most investors don't understand these principles and nuances, so you should feel free to reach out to me for a chat or a 2nd opinion on your investment plan.  This might be the most critical time in your investing career to do so.