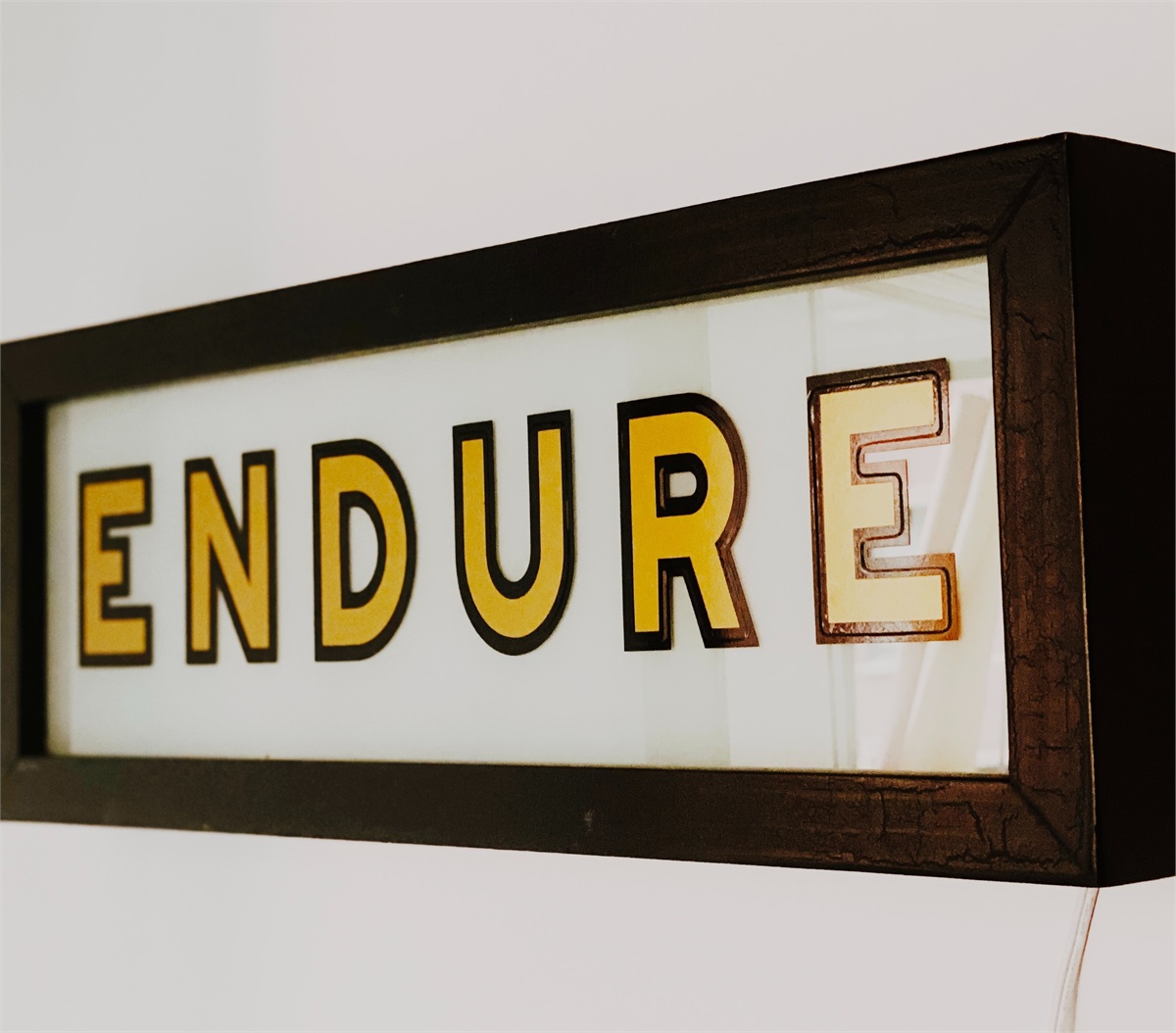 Surprisingly, one of the most outstanding sports leaders of all time grew up with social anxiety.*  In second grade, Steve Young refused to go to school.  Steve’s mom Sherry spent two months in his classroom until he felt comfortable going by himself.  When he was twelve, Steve wouldn’t go to Boy Scout camp.  Petrified to be away from home, he cried at the thought of spending the day with relatives at their house.  Steve never did sleepovers like a typical kid. “He just wouldn’t do it,” his dad said.

Even sports were a challenge for Steve.  In high school, he had a lackluster junior season before turning it around as a senior and being recruited by BYU.  But when he got to college, he was the eighth-string quarterback on the team as a freshman, relegated to the “hamburger squad.”  His memory of this? “Man, I wanted to go home,” Steve says.  Even as a sophomore, he was the backup quarterback.  Steve didn’t start until his junior year, and only his senior year could be called a success.  In the NFL, he followed a forgettable stint in the now-defunct USFL with a few years playing for the historically bad Tampa Bay Buccaneers.  After being traded to the San Francisco 49ers in the late 1980s, he was the back up to Joe Montana for four years, rarely seeing the playing field despite being in the prime of his career.

To look back on Steve’s life and professional career, we only see success.  Steve Young was one of the best quarterbacks in the history of football.  He won the Davey O’Brien award for most outstanding quarterback as a college senior.  He was twice named NFL Most Valuable Player, Steve also won MVP of Super Bowl XXIX, throwing for a record six touchdowns.  At retirement, he was the highest-rated quarterback in NFL history, surpassing his predecessor Joe Montana.  It’s remarkable that such a noteworthy professional career was punctuated by so much hardship.  It reminds me that the journey doesn’t always look like the destination.  In sports, in life, and in investing.

Stocks average about 10% a year over time.  That’s what we hear, and that’s what the Growth of $1 charts since 1926 shows us.  But that’s rarely what we get.  The chart below looks at the annual returns for the S&P 500 as far back as we have data.  How many individual years did stocks come within 2% of the 10% long-term average?  Just six times in 94 years!  Gains were as high as +54% and as low as -43%. 25 out of 94 years were negative.  You spend a fair amount of time as an investor feeling like the eighth-string quarterback on a football team.  But that’s part of the journey.  The destination isn’t possible without hardship. 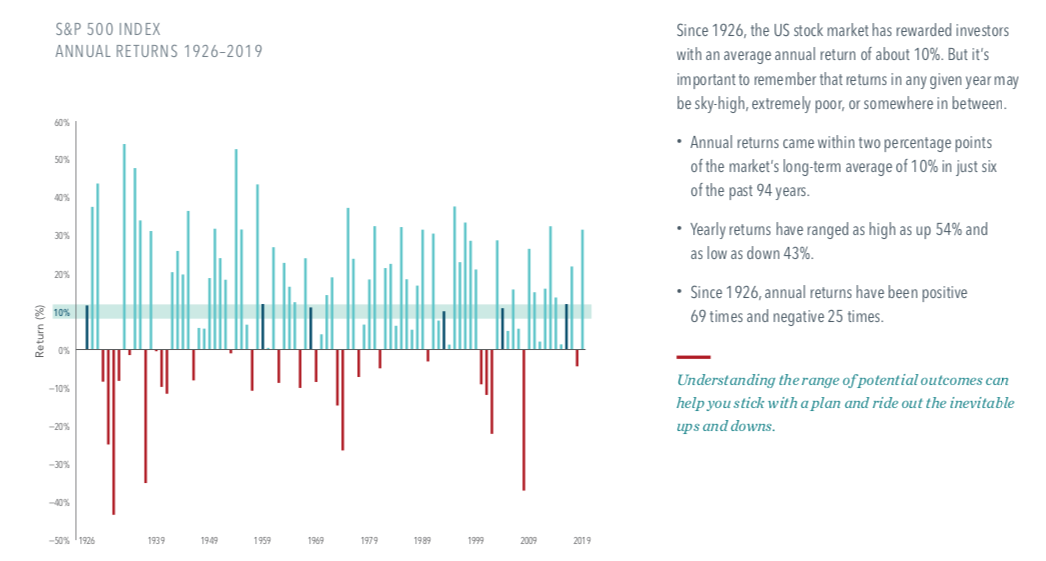 There are times when you’re investing that you want to give up.  Looking at your brokerage statements at the bottom of a bear market is like getting the wind knocked out of you.  Your natural response is to want to sell out of stocks and make the losses stop.  There were times in Steve Young’s Hall of Fame career that he wanted to give up.  “I went to school my whole first semester (in college) with my bags packed…I remember calling (my dad) and just saying, ‘Coaches don’t know my name. I’m just a big tackling dummy for the defense. Dad, it’s horrible. And this is just not what I expected…and I think I’d like to come home.’”  Like all of us, Steve probably would have quit if he didn’t have someone in his life to keep him on track.  The response from Steve’s dad, “Grit” Young?  “You can quit…But you can’t come back home because I’m not going to live with a quitter. You’ve known that since you were a kid. You’re not coming back here.”  Grit was tough but honest.  Steve persevered.

As a San Francisco 49er, watching the “Team of the 80s” rack up Super Bowls from the sidelines, Steve still thought about throwing in the towel.  “If I was ever going to find out just how good I could get, I needed to stay in San Francisco and learn, even if it was brutally hard to do…I many times thought about quitting…I heard boos during my sleepless nights, but I feared calling my dad. I knew what he’d say: ‘Endure to the end, Steve.’”

When asked about his dad and the suggestion that he was overly strict and controlling, Steve had another explanation.  “The context was that my dad knew me. He knew all I wanted to do was sprint home, and he knew that if he let me do that, it would be letting me give in to my fears. It was a loving act,” Steve concluded.  “It was tough, but it was loving.”   Grit knew what Steve wanted, and he knew what he was capable of—a former BYU quarterback himself.  “My goal was to teach them (Steve and his siblings) discipline,” he said, “and to go at things hard like I learned to do. You have to learn those things. They don’t just happen. It was important to me to teach the kids to finish what you begin.”

Investing success doesn’t just happen, either.  You have to know how to invest.  But more than that, you have to have the discipline and ability to ride out the rough times.  Is anyone truly capable of doing this alone? Could Steve Young have become one of the greatest quarterbacks of all time by himself?  Despite all of his natural skill and hard work, Steve would admit that he could not.  He required grit.  But he also needed “Grit.”  I believe the same thing is true of investors.  I’ve worked with many smart and experienced people in the last two decades.  They understand the science behind investing; their problem is between their ears.  For them, having a professional advisor and a mentor who keeps them from giving in to their fears, and doing the worst things at the worst possible times, is invaluable.

When you invest, you create a plan informed by long-term historical returns.  But your experience at any point in time rarely matches expectations.  Sometimes you’re way ahead, other times, like now, you might be behind.  But the longer you stick around, the more likely your reality conforms to history.  Without a coach, who knows you personally, what you want and need, and what’s best for you, it is far less likely you’ll have the grit required to ride out the tough times.  The odds are you won't finish what you began, and you'll never reach your destination.

*the story about Steve Young was adapted from Grit, by Angela Duckworth.