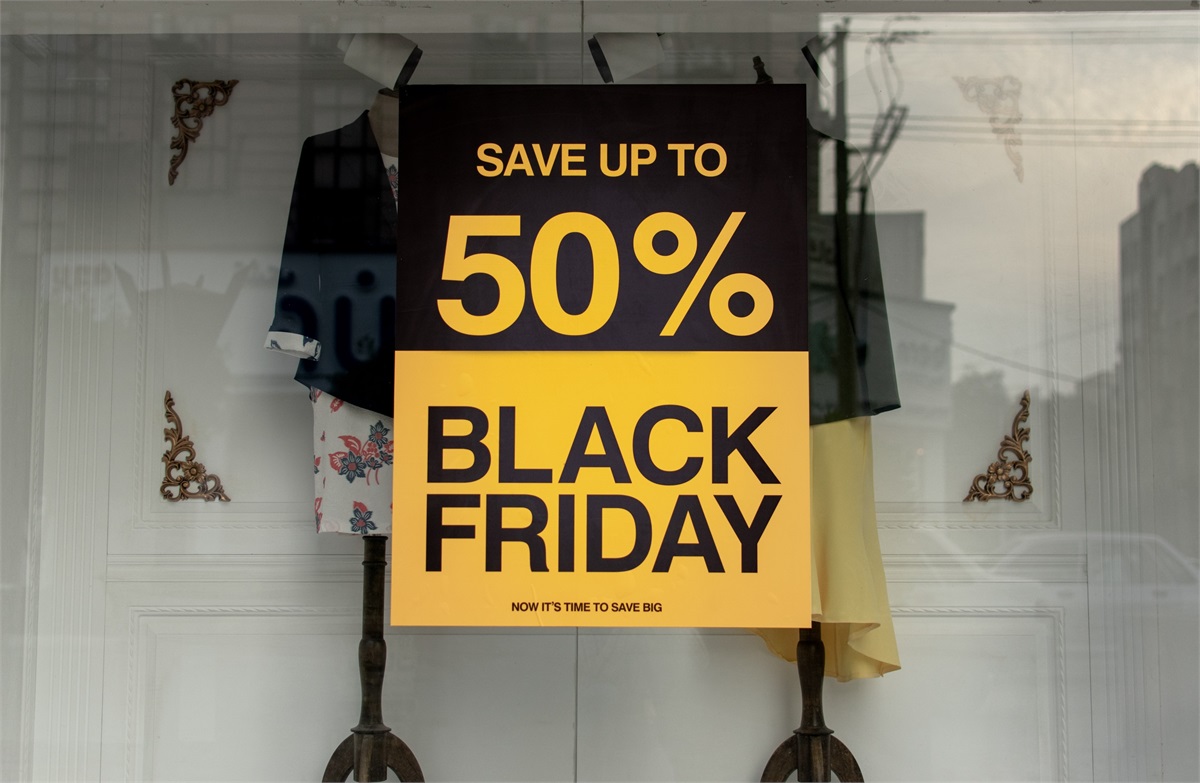 Is Now a Good Time to BUY Stocks?

Stock prices have fallen noticeably in the last six weeks as fears around the short-term economic impact of the Coronavirus continues to grow.  We recently had one of the worst down days for stocks in decades.  You would assume that buying stocks today, or buying more stocks, would be a huge mistake.  But a deeper look at our situation reveals this fear-based, short-term mindset hides a more rational, fact-based view that now is an excellent time to buy stocks.

If you don’t have liquid funds to buy more stocks, and haven’t reached a rebalancing trigger causing you to sell off some of your bonds to buy more stocks, this note will at least explain why holding on to the stocks you do own, and not selling, is your best course of action despite the wild daily stock market swings.

Here are six reasons why now is a good time to buy stocks:

First, the big picture.  Since 1926, the return on the S&P 500 has been about 10% per year.  Bonds have only earned about half that, +5% a year, but still outpaced inflation (CPI) by 2% per year.  Cash has always struggled to beat inflation, its average return of 3% barely exceeds CPI.  Today, however, conditions are different.  Even if stocks earn 2 to 3% a year less than their long-term average, they’ll still have significant positive real returns.  Bonds and cash, on the other hand, after the extreme decline in interest rates to start the year, yield 1% or less.  Stock dividends are approaching three times what the 10-Year Treasury Bond yields before considering the potential for stock capital appreciation!  If you're retired and/or withdrawing from your portfolio, keeping two to three years of future spending in a short-term bond fund is a smart financial planning move.  Any more than that and you’re guaranteed to lose money after inflation if you own anything but a diversified stock portfolio.

But the losses are so big at this point, how can you even think about buying more?  Simple—we’ve seen declines like this before, and stock recoveries haven’t taken very long.  The graphic below lists all of the downturns for the DFA Equity Balanced Strategy Portfolio from 1998 through 2019.  This one ranks up there with 2011 but isn’t the worst we’ve seen. 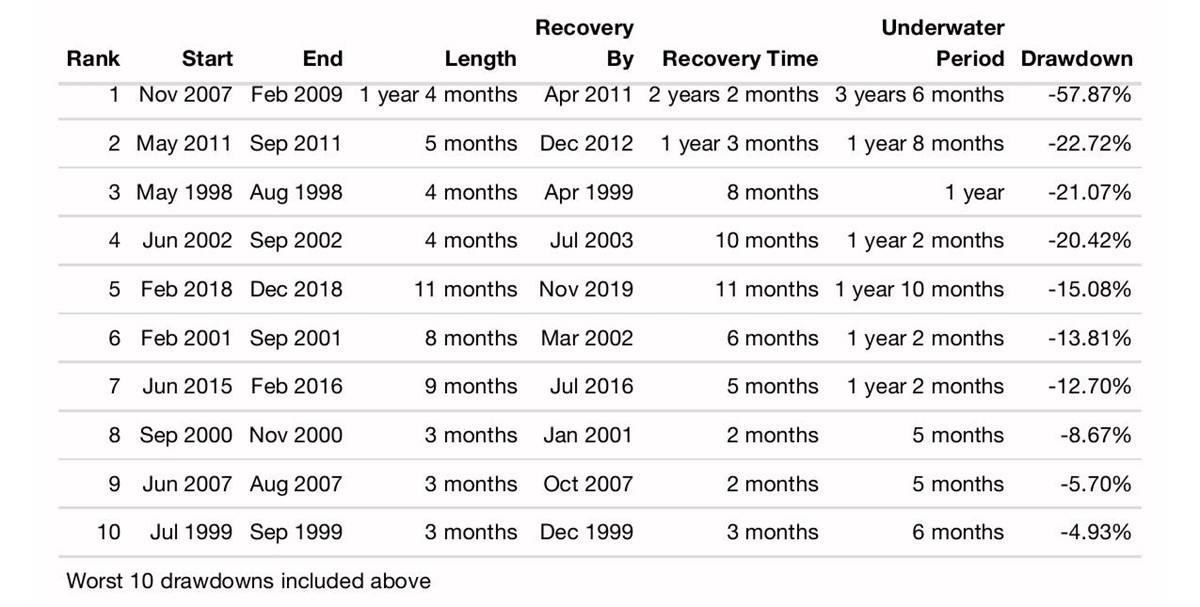 Think the declines are irrational today and overstated?  Then the subsequent gains should be just as crazy.  There’s no way to predict exactly where this market will bottom, and it’s a bad idea to try and guess.  Money invested today goes in after the significant declines, so even if we see greater immediate losses, we’re closer to the bottom of this decline than we were just six weeks earlier.  Current investments will only see a fraction of the total declines in this bear market, but once stocks recover, funds invested today have the opportunity to earn all of the rebound.

#3 — Stocks Tend To Snap Back From Significant Losses

What do you think is the average return on stocks over the next year, three years, or five years following a decline of -10%, -15%, or -20%?  Odds are, because you’re prone to recency bias and you tend to extrapolate whatever has happened recently into the indefinite future, you would guess significantly greater declines.  But that hasn’t been the case.  We can actually look back over 90 years and study dozens of stock market declines. 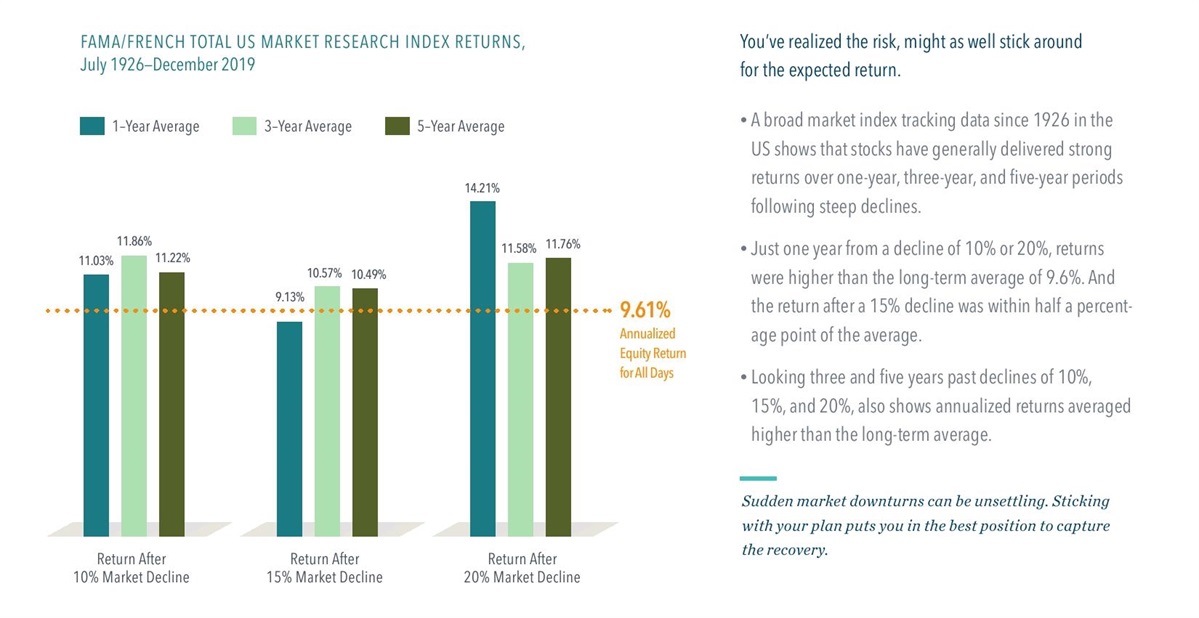 It turns out that future returns, even over the short run, have been positive after a setback.  As the chart above shows, in the most extreme example the average return on stocks, 12 months after a loss of -20% or more, is a gain of over 14%, almost 50% higher than the long-run average over all periods!  It continues to be above average over the following three and five years as well.

I went back and looked at the five worst months for the DFA Equity Balanced Strategy Index since 1970.  You’re never guaranteed to make money in the short-run after a big decline, which is why you should only invest your long-term funds.  But diversified portfolio returns over the next three months and 12 months following these significant declines were much higher than average.

If I total up the average of all three and 12-month returns after these brutal months, I find the average returns are +10.6% and +29.0%, respectively.  Four out of five periods in each case were positive.  When you invest today, you run the risk of a three month returns similar to the period post October 2008 or a 12-month period like the one post November 1973.  But the odds favor investing today and the likelihood is positive and much higher-than-average future returns.

Admittedly, it can be difficult to buy stocks when they’re gyrating wildly, so you need some justification beyond historical analysis and simple yield comparisons that you’re making a good decision when you buy more.  Let’s start with the price you pay for stocks today relative to their valuations.  This is a way to observe the relative value you get when you invest — when valuation ratios (like “price to earnings,” or “P/E” ratios) are high, you’ve tended to get lower future returns.  When they’re low, you’ve gotten higher future returns.  When they’re REALLY low, you’ve gotten…REALLY high future returns.  Stock valuations today are even lower than they’ve been during periods right after prior bear markets and preceding multi-year bull markets.  Let’s look at a handful of US stock asset classes to demonstrate my point:

This is admittedly my most subjective and anecdotal point, but I’ll make it anyway.  One of the most famous sayings about investing, dating back to the 1700s is that you should “Buy when there’s blood in the streets.” This quote is attributed to British nobleman Baron Rothschild,  who made a fortune buying stocks in the panic that followed the Battle of Waterloo against Napoleon.  Can you make a case that we’re in one of these periods today?  Here’s a screenshot of the CNBC website on Thursday, I think you’d agree that we can: 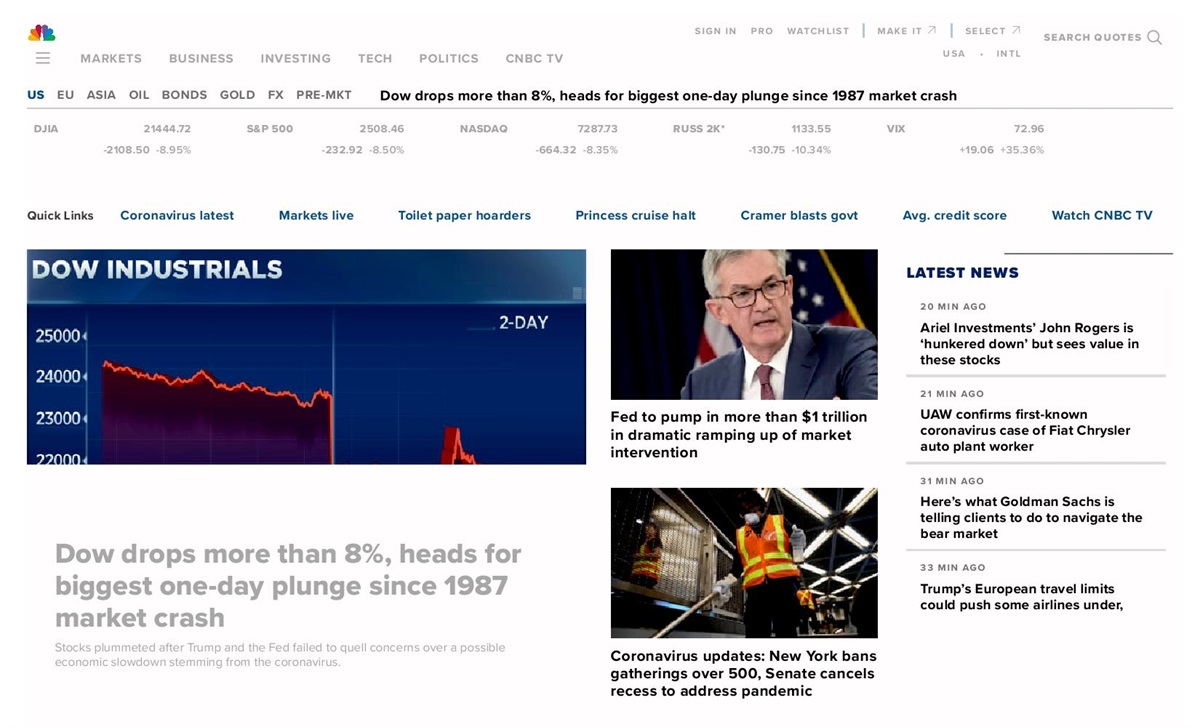 Ultimately, the case for buying stocks today is easy to make.  There are no alternatives to stocks if you want and need positive real returns.  Prices and price to valuation ratios for stocks are extremely low, financial fear levels are high, yet even worst-case projected scenarios about the coronavirus and its economic impact are not current expected to extend beyond months and into years.  No one is seriously suggesting stocks won't recover.

Some investors worry if they invest now it could get a little worse before it gets better.  But you’re never going to be able to invest at the absolute bottom; that’s a pipe dream.  Best to invest when things are cheap and focus on an intermediate to long-term holding period and results.  What happens in the next few days or weeks shouldn’t matter at all.  Far better to buy lower than to wait for even better prices, only to find you miss out on an unexpected market turning point and you miss your opportunity completely.