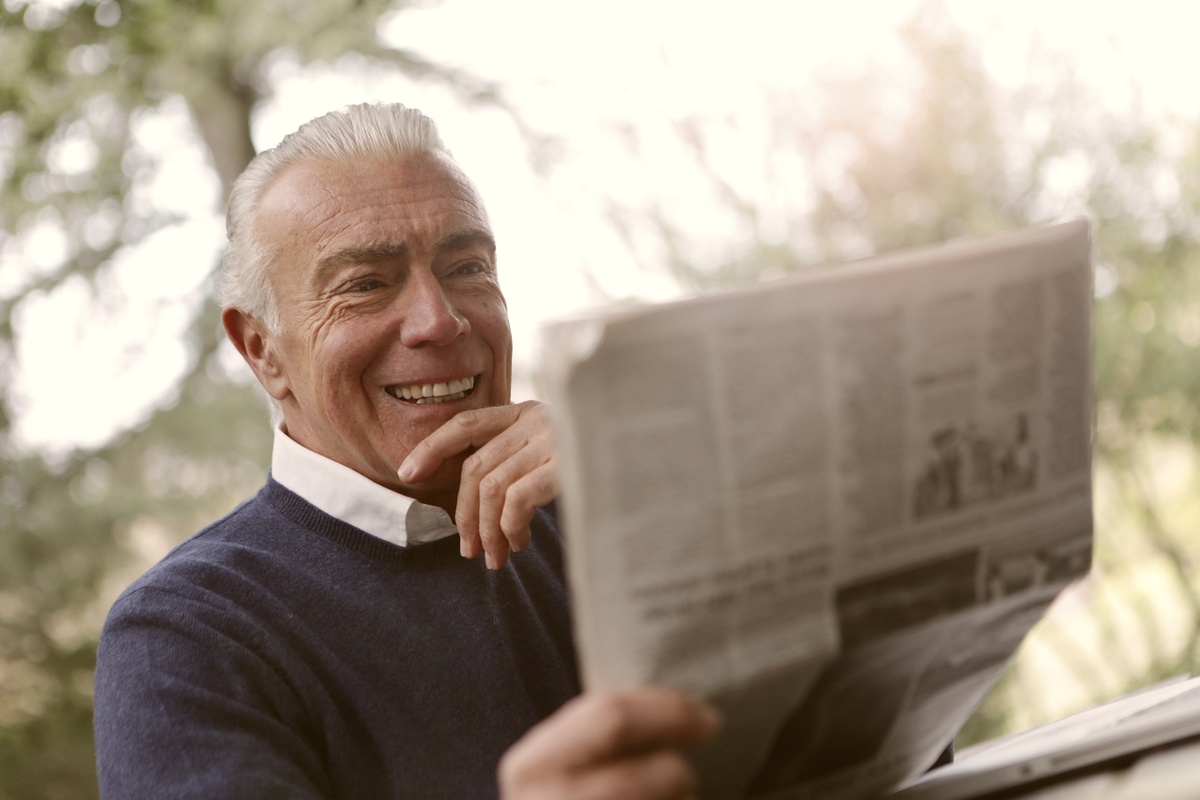 Can Seniors Have Too Much In Stocks?

According to the British Medical Journal in 1995, a 29-year old construction worker walked into an emergency room after landing foot-first on a fifteen-centimeter nail, which was sticking up out of the top of his construction boot.  It had seemingly penetrated leather, flesh, and bones.  Ouch.  “The smallest movement of the nail was painful (and) he was sedated with fentanyl and midazolam,” powerful opioids and sedatives, the journal reported.  Imagine the surprise then, when the nail was pulled out from below the boot and doctors found it had actually penetrated between the toes; the foot was completely unharmed!*

It’s not uncommon for us to make a big deal out of things that really aren’t.  Sometimes it’s an individual situation, sometimes it is a circumstance that affects a large swath of the population.  That is the case with older investors/retirees and their fear of the stock market; it’s as unfounded as a serious wound resulting from a nail that passes innocently through a shoe and past all appendages.

Stocks Too Scary For Seniors?

I was reminded of this fact after coming across a recent Wall Street Journal article titled “Seniors May Have Too Much In Stocks.”  According to the article, the volatility in stocks this year “is sending a wake-up call to older Americans that maybe they shouldn’t invest like they used to.” Huh?  Can you imagine altering your long-term investment plan because of some single-digit movements (which is to say nothing at all) in stocks over a few weeks?  That 40% of investors at Fidelity between 60-69 have 67% or more in stocks, and 17% of Vanguard investors between 65-74 are 98%+ in stocks, is presented as a serious problem.  As I will explain, it’s not.

I would normally write off articles like this as typically bad advice from the short-term obsessed financial media (for example, I managed to avoid writing about Morningstar's “Four Good Reasons To Sell Stocks” last week, which was published just prior to a +5% one-week gain on the S&P 500), but the WSJ article cites one of my favor authors, William Bernstein, in support of drastically reducing your exposure to stocks in retirement.  Bill suggests, in line with the article's theme, the case of a retiree with $1,000,000 needing 5%, or $50,000 per year, that they hold no more than 50% in stocks (with the rest in bonds and cash).

There is a belief amongst financial commentators and advisors, even some “retirement researchers,” that stocks are so volatile, so dangerous, their declines so severe and long lasting, that were you to retire on the eve of one of these catastrophic events, you would be wiped out and your retirement busted.

It’s usually never revealed how infrequently we see serious bear markets in stocks, and never revealed that these bear markets—which can push stocks -30%, -40%, or -50%+ lower for a time—tend to happen very quickly and almost always recover fully in just a short amount of time.  The fact that what is left from investing in stocks, after including these bear markets, is a much higher (than bonds/cash) long-term return that allows you to grow your portfolio principal in excess of your withdrawals in retirement, affording you the ability to take an ever-increasing amount of income to combat the vagaries of rising inflation, is completely ignored.

Don’t believe me, you say? Let’s look at the data.

Dimensional Fund Advisors provides me data updated monthly on a series of well designed, globally diversified stock and bond “Balanced Strategy” index allocations with returns all the way back to 1973, almost a half-century.  These allocations are representative of how we actually invest so it is a great data set from which we can model retirement scenarios and measure the true risk of stock-heavy allocations.

First, let’s observe the long-term returns of the various stock/bond allocations compared to inflation and the S&P 500.

The all-equity allocation, the “Equity Balanced Strategy Index,” compounded at a whopping +13.3% per year, over 9% a year more than inflation and over 2% per year more than the S&P 500 due to the benefits of global diversification and including an allocation to small cap and value-oriented stocks.

Right away we see a few things:

First, the return on a well-diversified, all-stock portfolio in excess of inflation has been so high, it’s hard to imagine even the worst bear markets providing much friction in an effort to spend just 5% a year (plus inflation) of your savings.

Second, the diversified index approach is far better than putting all your money in just one segment of the stock market, like the S&P 500 (or the virtually identical Total Stock Index), as Vanguard would have you do.

Finally, as we add more bonds, the long-term returns drop precipitously, creating an ever-smaller spread between gains and withdrawals.  This, as common sense tells us, is not good.

Simple math reveals that if you earn 13%, or 10%, or 8%, and only spend 5% per year, you are going to be OK.  Stock returns don’t have to be anywhere near as high as they’ve been historically for diversified stock portfolios to represent great funding vehicles for retirees.  If the spread between stocks and bonds is simply as wide as it’s been, which seems like a safe bet with interest rates still hovering at record lows while value, small cap and international equity valuations remain quite reasonable, stock-heavy and all-stock allocations win.

How About The Bad Times?

But what of these bear markets? A few have been devastating.  Have they knocked the luster off stocks in retirement?  Have more balanced portfolios with lower volatility/losses and long-term returns actually held up better?

There were a grand total of five years of declines on the Equity Balanced Strategy Index between 1973 and 2010 (any more recent declines didn’t afford us enough future years to do a meaningful post-decline retirement simulation).  That’s it, just five.

So the first lesson on losses is this: if you’re sitting around expecting a huge decline in stocks every few months or every year, you’re going to be waiting a long time.  Over all 49 years, for example, through 2021, the Equity Balanced Strategy Index only declined nine times, and declined double digits for a year five times.  That's a negative return in only one out of every five years (20%), and a loss greater than -10% in only one out of every ten years (10%).  Only the most extreme nervous Nellies would be kept up at night.

The summary of the results: Not a single one of these “worst case” retirement scenarios saw the all-stock allocation end with less than any of the portfolios that contained bonds.  Every time the end result was the more you held in bonds, the less you had left after withdrawals.  That’s not safe.

In some cases, in fact, the portfolios most heavily invested in bonds were the ones on the verge of running out of money! It isn’t the all-stock or stock-heavy allocations that appear risky in retirement, it’s instead the allocations with more in bonds and less in long-term returns.  The bear markets just don’t matter much after a while—the all-stock and stock-heavy allocations do drop more at first, but rebound faster and eventually come out ahead, sometimes dramatically.

You can observe all of the results in the table below, but I will focus on just two portfolios for commentary—the all-stock allocation and the 40/60 allocation which, if we are to believe Bill Bernstein and the WSJ article, is the best allocation for a retiree worried about a bear market and forced to sell 5% a year of their portfolio to live on.

The 25-year period starting in 1973 should keep all retirees up at night, it saw almost a -50% immediate decline on the S&P 500 coupled with a decade of over 6% per year inflation.  All of the retiree boogiemen in one period?  But look how well the all-stock allocation did!  $1M grew to $13.8M net of withdrawals over the next 25 years, compared to just $2.8M in the 40/60 allocation.  The only risk evident in this scenario was the loss of $11M in assets you could have had if you didn’t live in fear of short-term stock losses.

1990? Returns over the last few decades have been more muted, international stocks in particular have been disappointing.  But retiring in the year of the 1st Gulf War and over 6% inflation didn’t change the result.  The all-equity allocation ended 25 years later with $6.4M left after withdrawals, the 40/60 allocation had just $1.9M; at this point withdrawals were starting to make a serious dent in the bond-heavy portfolio’s remaining balance.

How about 2002 (followed too soon by 2008) and the tech collapse? Again, the all-stock allocation worked fine—by 2021 (just 20 years), the $1M had grown to $3M; in the 40/60 you had seen that balance drop to just $888,000, below the starting value as ever-increasing withdrawals were decimating the principal balance.

Finally, 2008; the worst year for stocks since 1931.  Surely this period will put a dent in the prospects of the all-stock index as a retirement funding vehicle? Not so far.  We only have 14 years since that brutal year, but the all-stock allocation is still performing better; $1M in the Equity Balanced Strategy Index net of withdrawals has grown to $1.3M (after spending a few months below $500K in early 2009!), while the 40/60 is down to $775,000.  While the all-stock index lost a ton right away, it has slowly climbed out of its hole while never skipping a withdrawal, the 40/60 investor is probably starting to think about pairing back on withdrawals as the $50,000 adjusted for inflation has grown to over $66,000 in 2021.

The fact is, all-stock and stock-heavy allocations are more volatile and lose more in bear markets than portfolios that include large bond positions.  But there’s no free lunch in investing—with lower volatility comes lower long-term returns, and possibly a return that is too low for you to achieve your long-term spending and legacy goals.

Instead of trying to "protect your principal" and avoid short-term losses in retirement, seniors should shift to thinking in terms of their long-term goals, how much it will take to fund them in the decades ahead, and the “purchasing power risk” they face if portfolio returns don’t keep pace with their spending needs.  When you do this, you find that diversified stock portfolios represent as close to the optimal retirement funding solution as we have available.

And what of the unpredictable but inevitable bear markets? You may find that setting aside a few years of spending in a short-term bond fund might give you the confidence that you can weather the storm and won’t be forced to sell stocks at their nadir.  The lower-return component will hurt your long-term wealth accumulating efforts, for sure.  But when framed the right way, a small reserve fund may prevent us from giving into our fears of a plunging stock market and ensure we can hold on for greener pastures and the much higher long-term returns that stocks offer us.  In the tables above, for example, the 80/20 allocation was never as successful as the all-stock allocation, but it was noticeably better than the 60/40 and certainly the 40/60 and 20/80 allocations.

Can seniors have too much in stocks? I can’t possibly see how.

Are you unclear about how much to hold in stocks as you approach retirement? Do you have anxiety around the lack of diversification in your stock portfolio? Have no idea how to generate a withdrawal from your hard-earned savings?

Click here to set up a 15-minute call with me and we can chat further.