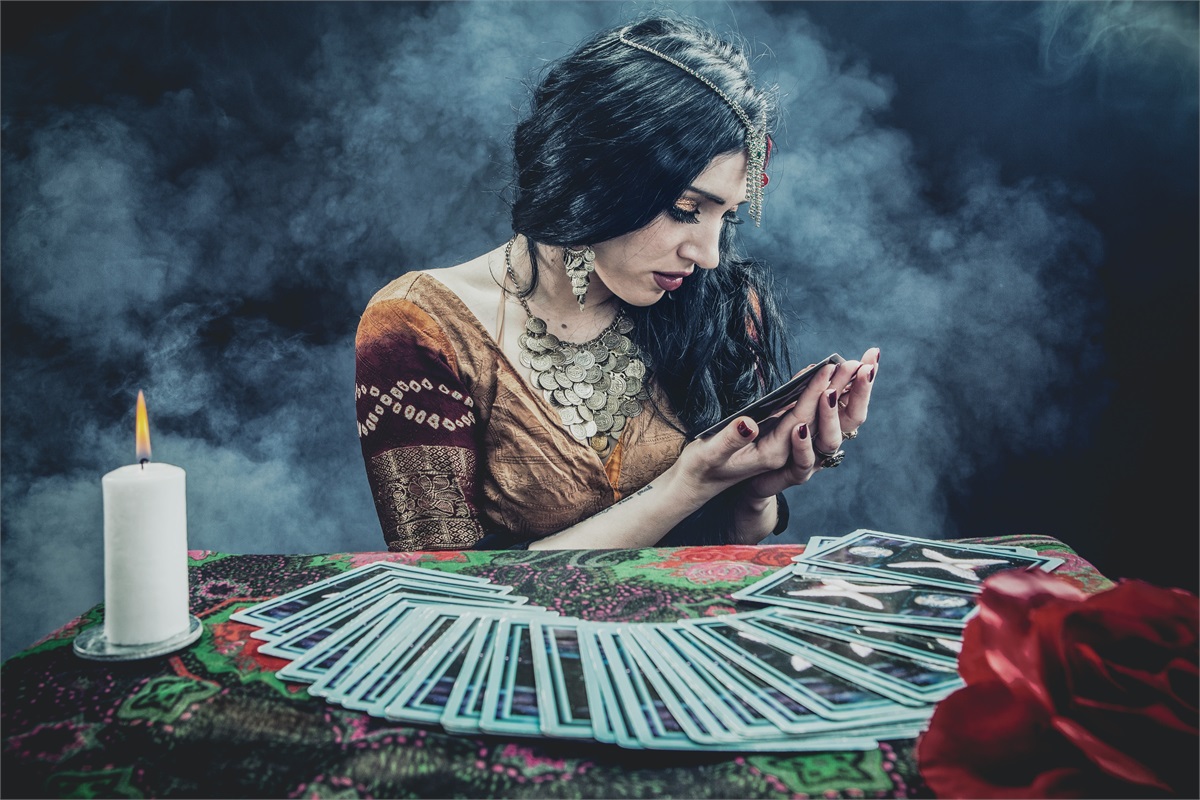 What Did You Think Would Happen?

There was a fair amount of skepticism surrounding our small cap and value tilted Asset Class portfolios a year ago...

Wall Street Journal headlines and CNBC reports suggested that it was unlikely stocks would rebound any time soon, and if they did, it would be large-cap, blue-chip US stocks, commonly found atop the S&P 500, that would lead the way.  Stodgy and boring small cap and value stocks?  International companies?  They hadn't done as well lately so it was assumed they would just continue to falter.  Investors and the financial media (as well as some advisors) are chronically plagued by "recency bias," which is a tendency to assume whatever has happened most recently will continue indefinitely into the future -- even when recent returns are materially different from long-term trends.

Enlightened investors knew better.  We've spent a considerable amount of time reviewing the financial science behind market efficiency, the dimensions of expected returns (such as the stock market, small cap, and value factors), the random ebbs and flows of a diversified portfolio compared to the S&P 500, as well as long-term historical returns data.  It was this last bit of wisdom -- our knowledge of market history -- that I suggested that we should lean on for how to proceed during those dark days a year ago.

In most historical bear market recoveries, it wasn't the largest and most growth-oriented stocks that rebounded the fastest.  Traditionally, smaller and lower-priced value stocks came back much more quickly.  As I mentioned in client letters, this meant that we were even better positioned for an eventual recovery, and the cost of bailing out in the midst of the downturn would be even more costly for our portfolios -- as I believed we would be at the front of the line when the inevitable recovery ensued.

What gave me this confidence?  We could look at all the examples dating back to the 1920s, but for the sake of brevity, let's just review recent history...

Consider the first 12 months after the 2000-2002 tech stock collapse.  After a -40%+ decline in the three years to start the century, the large growth-oriented S&P 500 Index had a sharp rebound, gaining +35% beginning in early 2003.  But a Diversified Asset Class Stock Portfolio* that included the S&P 500 as well as US and international large and small cap valuestocks did much better; its +64.8% gain was almost +30% ahead of the S&P 500.

What helped propel it's returns the most?  US small value stocks, with an eye-popping gain of over +85%. 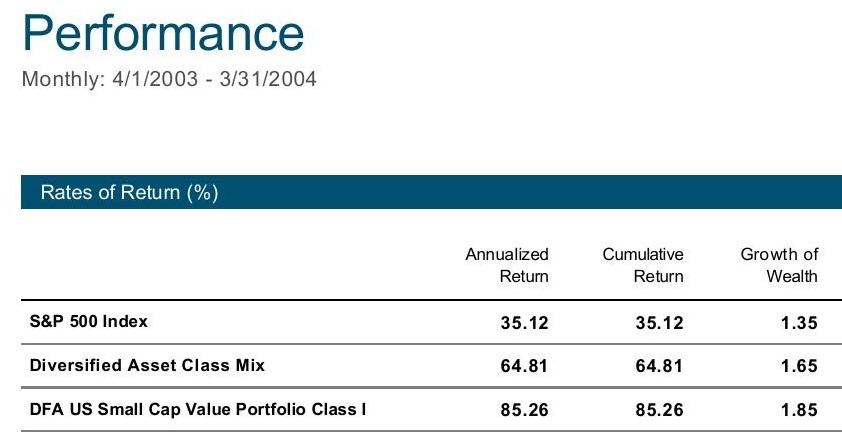 Of course, the circumstances surrounding the 2000-2002 tech stock collapse were different from the banking and real estate crisis we lived through in 2008.  Investors who always believe "this time is different" might have assumed the stock recovery that began in early 2009 wouldn't follow historical patterns.  Instead, those investors simply learned, again, why it is said the four most expensive words in the English language are "this time it's different."

For the 12 months beginning in March of 2009, the S&P 500 once again had impressive gains, appreciating over 53%.  But the Diversified Asset Class Stock Mix, which included many of the financial and energy stocks that had been hit hardest during the decline, fared much better.  Its return of +71.5% was even better than it's early 2003 showing, and outperformed the S&P 500 by almost 20%.  That performance, once again, was helped most by US small cap value stocks, that produced a +83.6% return, almost identical to its performance in 2003 shown above. 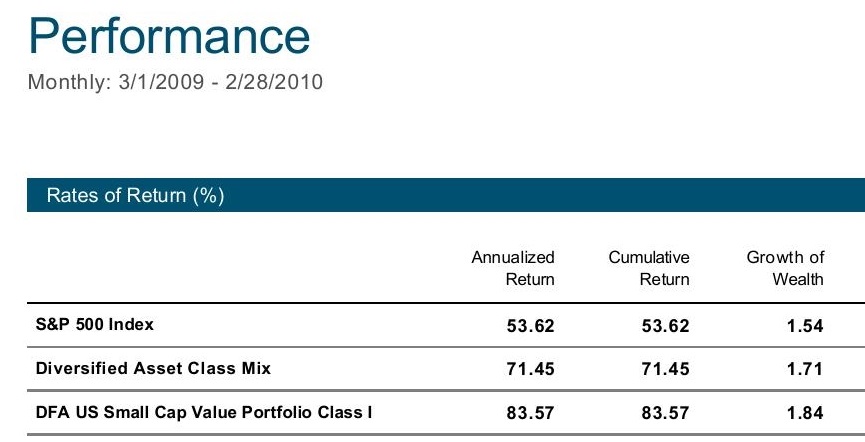 Which finally takes us to the recent record.  As you now know, after a breathtaking -34% decline on the S&P 500 in just 33 days beginning in mid February of 2020, stocks began what was possibly the most unexpected rebound in history (in terms of when it started) on March 23rd of last year.  What did the next 12 months look like in terms of the recovery?  This bear market was so different, the recovery seemingly so uncertain, who knew what could play out?  Again, if you knew market history, the answer isn't a surprise.

The S&P 500 return over the last 12 months looks almost identical to the rebound it had in early 2009, gaining +56.4%.  Certainly, the large cap tech stocks -- Facebook, Amazon, Apple, Microsoft, and Google -- did well in the rebound and this helped push the large cap growth index to all-time highs.  But large cap growth stocks were the worst relative performer in the last year; US and international large and small cap value stocks did much better.  The Diversified Asset Class Stock Mix gained +74.5%, the best one-year recovery compared to any of the previous bear market rebounds this century, almost 18% better than the S&P 500.

And once again, which asset class led the way? US small cap value, with an astonishing +112.1% return.  For every $1 you had the courage to keep in (or add more to by rebalancing out of large growth or short-term bonds) the DFA US Small Cap Value Fund (DFSVX) last year, you now have $2.11. 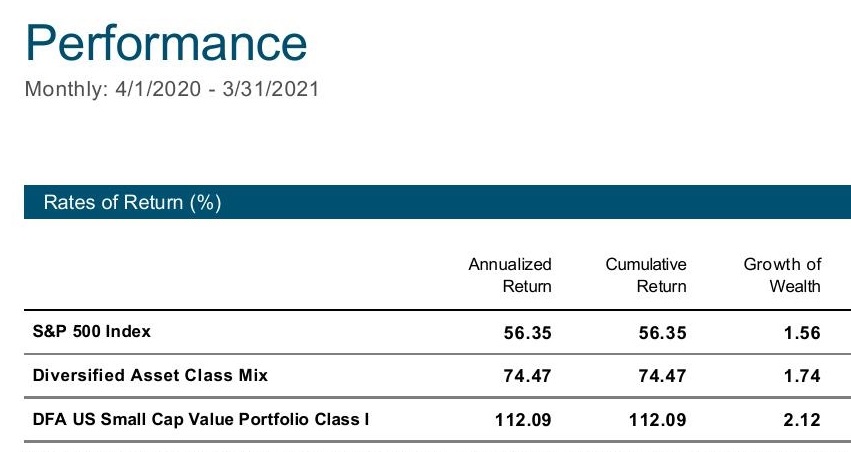 So we've seen that history provides us not just an excellent picture of what to expect in terms of long-term asset class returns, but also the pattern of those returns during bear market recoveries.  It's true, the cause of the decline always seems to be different.  It will be next time as well.  But the market rebounds in much the same way each time.  The saying "Those who cannot remember the past are condemned to repeat it" is clearly appropriate for investors.

It should be noted, however, that not all small cap value strategies had the same success as our preferred DFA US Small Cap Value Fund.  Traditional index funds, like the Russell 2000 Value or the Vanguard Small Value Index, hold a more watered down basket of small cap value stocks.  They include many mid cap companies, and they lack a pure low-priced value stock focus -- including many "blend" and even some "growth" stocks.  What's more, they're only updated once or twice a year, while DFA manages and rebalances their asset class funds on a daily basis.  The result?  When small cap and value stocks are outperforming, as they typically do, the deeper and more pure/consistent focus of the DFA US Small Value Fund should generate higher returns.

Was this the case recently?  If you've read this far you already know the answer -- of course it was.

The Russell 2000 Value Index returned +97.1% in the last year, a strong return for sure.  But that was over 15% less than the DFA US Small Value Fund.  Not surprisingly, the Vanguard Small Cap Value Index, which is pegged to the CRSP US Small Cap Value Index, did even worse.  Vanguard's value and small cap indexes are the least "style pure" of almost any on the market, holding a bevy of mid cap stocks and growth stocks in their "small cap" and "value" portfolios.  Vanguard's funds are good for low expenses but fall short when it comes to portfolio design and implementation.  This shows up in the results -- the Vanguard Small Value Index returned just +89.7% -- a strong return in absolute terms, but a dismal showing compared to the DFA US Small Value Fund, trailing it by over 22%. 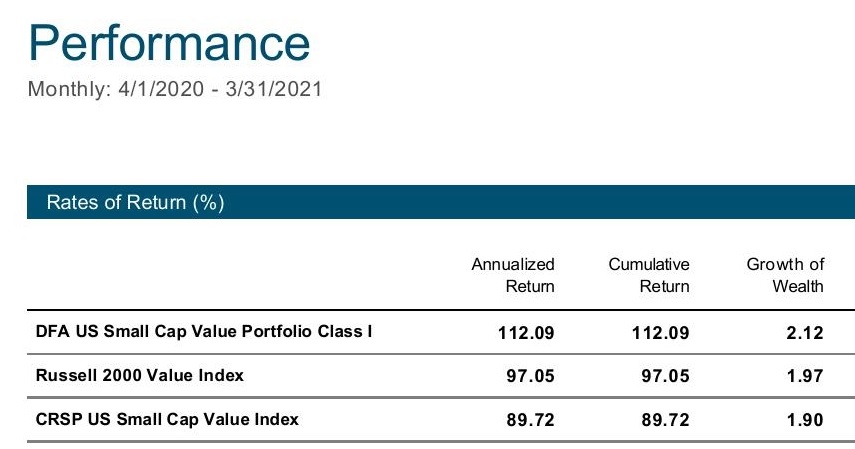 Think back to a year ago, what did you think the next 12 months would look like?  What did you think would happen?  If you were glued to CNBC or pouring over Wall Street Journal articles, you probably thought things would only get worse.  But if you understood market history, and trusted a core set of proven investment principles, you would have had greater reason for optimism.

Historically, markets have rebounded from even their worst declines at a rate far quicker than anyone believes possible.  The only people who wind up losing money are the ones who sell out -- trying to avoid greater losses -- only to find out they've missed the upswing.  This loss is especially acute when you hold greater-than-market weights in higher returning small cap and value stocks, and especially inside DFA funds, as these are the asset classes that have tended to recover most quickly.

If you made it through the last year unscathed, you are to be congratulated.  It was anything but easy.  But if you didn't, it might be time to invest in a greater understanding of how markets work, study the history of investment asset class and diversified portfolio returns, and consider a trusted financial partner/professional advisor who can design a plan that is appropriate for you long-term goals and help you stick with it when the going gets tough.  That way you'll have someone who can answer the question: "What do you think will happen?"