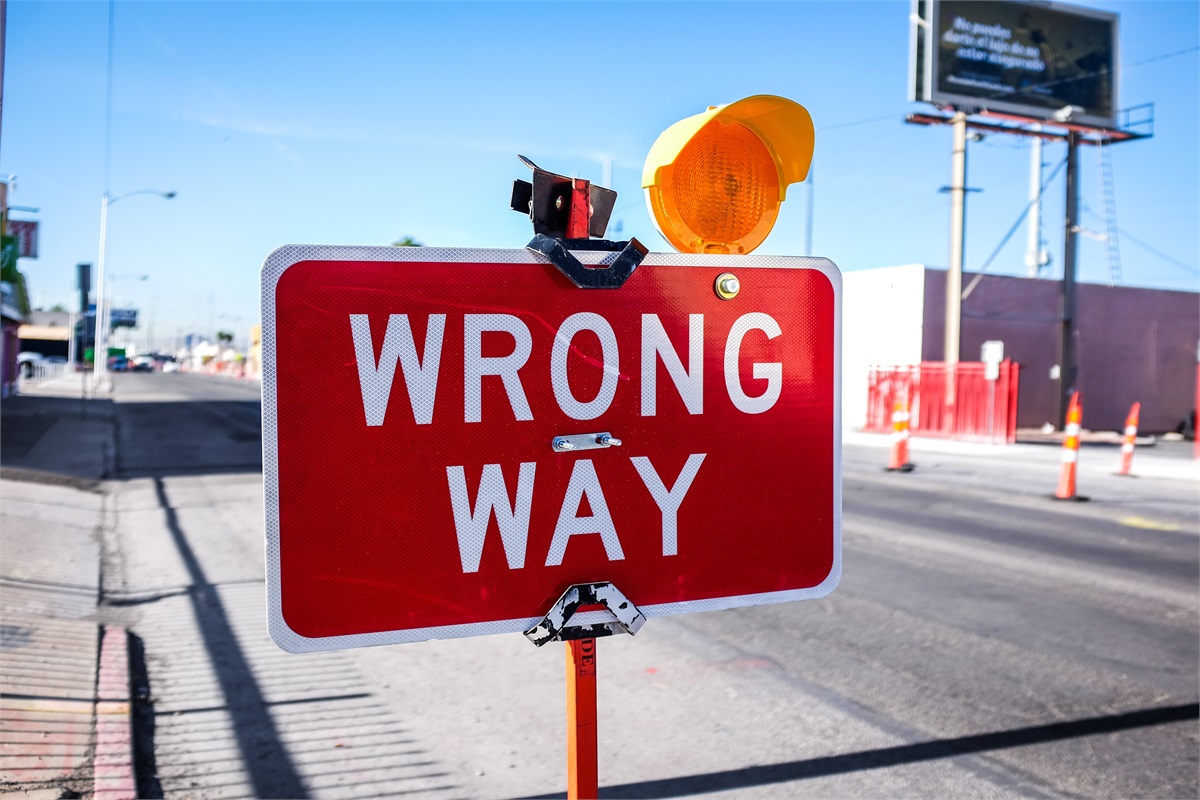 After the terrorist attacks in September of 2001, which killed almost 3,000 people, Americans abruptly stopped flying.  Politicians were so worried about the mass exodus from air travel that they bailed out the airline industry.  In politics, as in life, doing something is rarely seen as a mistake.

How many times have you thought to yourself or heard the saying, “don’t just stand there, do something!”

What no politician mentioned was that air travel is much safer than driving.  In fact, the most dangerous part of a typical flight is the trip to the airport.  Car crashes, unlike terrorist attacks, aren’t covered live and sensationalized on the news or in TV series or Hollywood movies; we’re familiar with driving, and most of us do it every day, so the risks seem reasonable.  The fact is, however, that even if terrorists hijacked and crashed one passenger jet a week in the United States, a person who took one flight a month for a year would have a 1 in 135,000 chance of being killed.  The risk of dying annually in a car crash?  1 in 6,000.

The shift from planes to cars lasted one year, then life went back to normal.  Gerd Gigerenzer, a psychologist in Berlin, conducted a study on the increased fatalities that occurred due to our travel changes after 9/11.  According to his data, 1,595 additional deaths resulted from our increased use of cars. This is almost half the amount that died from the terrorist attacks overall, six times more than died on the airplanes and 319 times the number that died from the infamous anthrax attacks that followed a few months later*.  You don’t hear about the increased automotive deaths when you read accounts of the September 2001 attacks, however, because they aren’t a direct outcome of the terrorism—they’re unintended consequences.  But unintended consequences often have the same or greater impacts than the experiences that predate them.

When stock prices are falling, and the financial headlines are predicting the worst is yet to come, our first thought is to sell.  Even though we’ve sustained losses, getting out of stocks will ensure that we don’t lose any more, and we’ll be able to preserve what we have.  But is losing more money the most likely outcome?  Selling stocks after a decline has serious unintended consequences.

If we look at all one-year, three-year, and five-year periods after a decline of -10%, -20%, or -30% for stocks, we see that gains, not losses, are the most probable outcome.  Imagine an investor who bails out of stocks after a 20% decline; if they wait three years to get back into the market, they've missed an average gain of 35%.  If they waited five years, the missed-out-on gain is over 70%!  As the saying goes, more money has been lost trying to avoid bear markets than in the bear markets themselves. 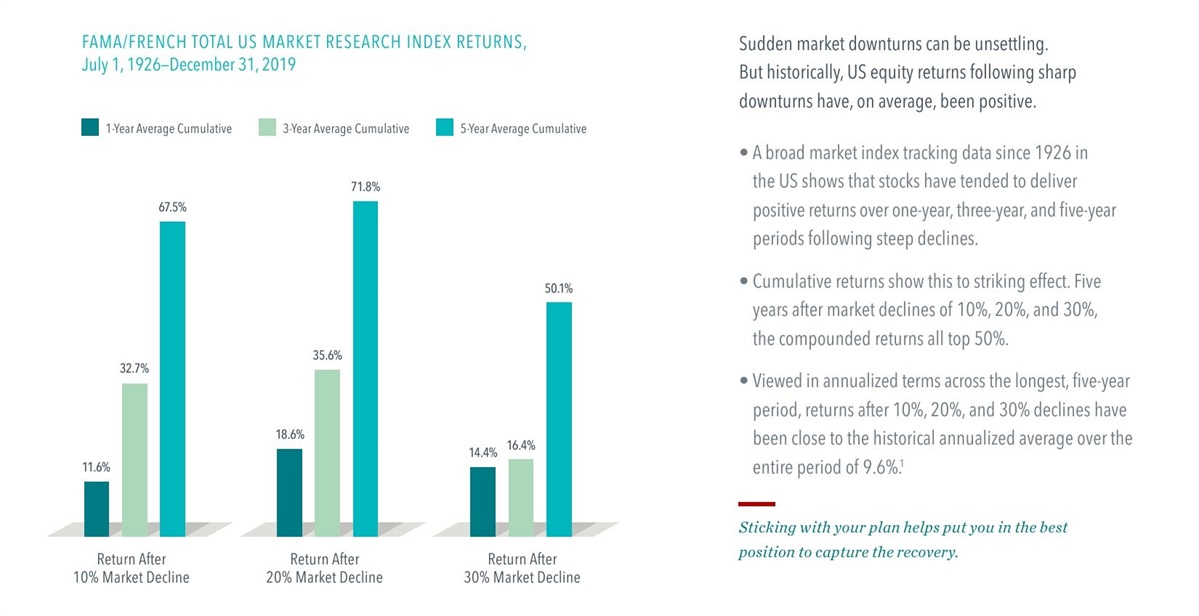 Fear of Missing Out

Selling stocks after a decline is one investment example that leads to costly unintended consequences.  Selling underperforming stock asset classes in favor of those categories that are outperforming is another.  In the late 1990s, like today, technology stocks were clear market leaders.  Growth stock mutual funds were trouncing value funds, causing many investors to question the long-held view that value outperforms growth over time.  At one point in 1999, we could look back over one, three, five, 10, and 15 years and find that an index of high-priced growth stocks had outperformed value.  Most investors gave up on value investing, despite robust academic support and almost a century of data confirming value's superiority.  Investors felt as though they were missing out on much better returns that could be earned if they loaded up on the highest priced companies.  But switching to growth stocks after a long run of unexpected outperformance had severe unintended consequences.

The graphic below shows that just one year later, in 2001, growth stocks had dropped considerably, losing over 30%, while value stocks continued to gain value.  After this significant turn of events, it was now value that held the performance lead over growth for one, five, 10, and 15 year periods.  Selling value stocks and jumping into growth stocks cost the investor more in terms of losses than they ever missed out on in gains during the 1990s.  Investors today who are thinking about bailing on value stocks after another disappointing run face a strong probability that history repeats in the next few years. 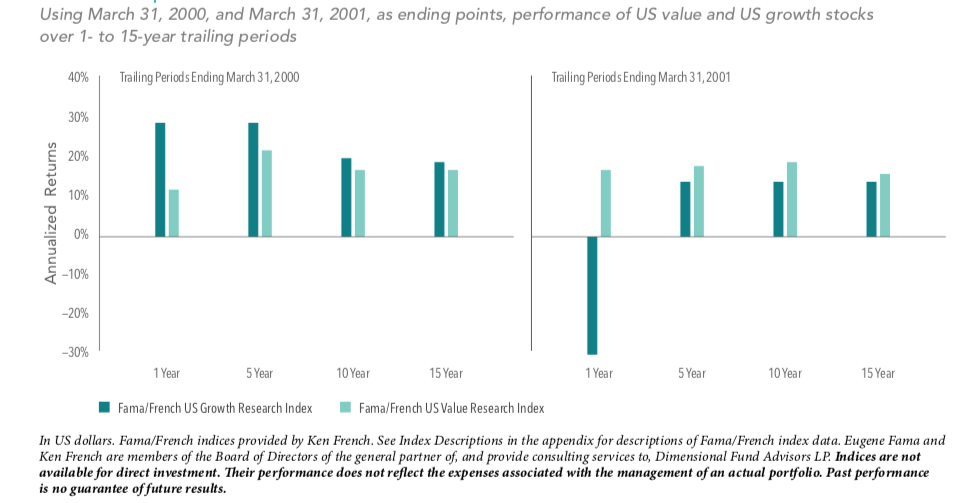 The reason why an investment plan is so essential to long-term financial success is that it gives you a roadmap in uncertain times.  Absent a clear plan of attack, we tend to overreact to headlines and short-term market conditions.  "Doing something" seems to make sense in the moment because it addresses the immediate problem or concern.  But it ignores the longer-term consequences of making changes that you wound not ordinary consider in more tranquil times.  This is where a financial advisor can help -- coaching clients to stick to their plan and avoid making knee-jerk reactions that seem sensible in the moment but have far more serious long-term, unintended consequences.

That's why the best advice, so often, is instead "don't do something, just stand there!"

*source: The Science of Fear: How the Culture of Fear Manipulates Your Brain, by Daniel Gardner.