Stocks have been on a tear lately.  The oft-cited Dow Jones Industrial Average (“Dow”) recently crossed 28,000 and has continued to reach higher highs. The case for stocks isn’t a recent phenomenon; investing in stocks has been the winning wealth strategy for most of the last century, with the details even more impressive than many people realize.

Stock investors have much to be thankful for, as I will explain in greater detail this month.

If you think stock’s superiority came from a small number of standout decades, you’d be mistaken.  Over all 10-year periods, stocks beat bonds 82% of the time.  It was more likely that stocks earned outsized gains than losses—22% of all decades saw stocks beat bonds by over 10% per year.  Outstanding stock returns aren’t the exception.

Stocks Don’t Get Stuck In The Past

What about bad times?  Or when stocks are at record highs? Aren’t there some periods when it’s advisable to sit on the sidelines and wait for a better time to invest? In both cases, the past offers no prediction about the future—gains are always most likely.

The chart below looks at all one-, three-, and five-year periods after the S&P 500 has declined by at least -10% or after it’s reached an all-time high. 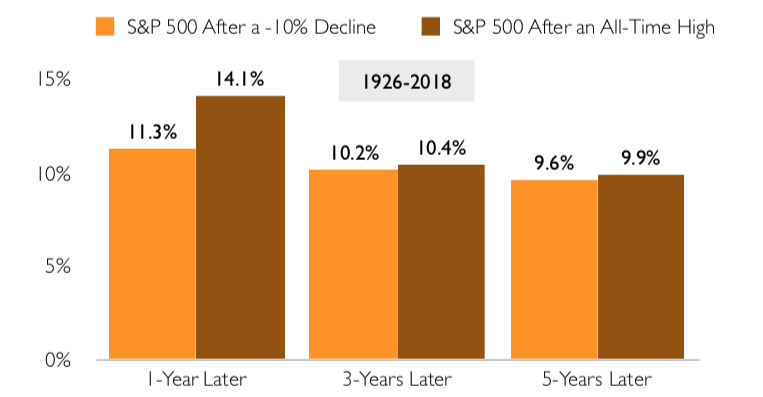 Declines are usually brief and stocks typically reverse course in short order.  The average annual return after a -10% decline is a gain of +11.3%.  Three and five-year periods show similar profitability.  New highs aren’t reason for concern either.  Evidence shows that they typically forecast more gains to come—one year after a fresh peak, stocks are +14.1% higher on average, and gain about +10% per year over the ensuing three/five years.

To be a successful stock investor, you haven’t needed to parse the past for clues about the future; staying disciplined and fully invested have been sufficient.

Stocks Have Provided The Best Diversification

The S&P 500 is an index dominated by large cap, growth-oriented stocks.  Different stocks, however, have different returns at different times, complementing each other.  The lowest priced large and small cap “value” stocks have historically earned higher returns than the S&P 500.  Compared to its +10.5% average gain over all decades since 1928, large value stocks returned +12.5% per year; small value stocks returned +15.3%.

You don’t need to look to exotic bonds and/or alternative assets for meaningful diversification.  Holding different “core” stock asset classes (including international stocks) has been sufficient.

Stocks Have Shrugged Off Inflation

The returns cited thus far don’t include the corrosive effects of inflation, but the risk of higher prices on the goods and services you (or your beneficiaries) will eventually purchase is an important consideration.

For example, inflation rose above 3% in 1968, and didn’t fall below 4% in a single year until 1982.  Over this 15-year period, the Consumer Price Index (“CPI”) increased at an annualized rate of 7.3%.  Bonds barely matched inflation, gaining +7.6% annually.  Long-term government bonds significantly underperformed inflation, returning just +5.5% per year.  Large cap growth stocks didn’t have great returns either, the S&P 500 returned just +7.0% per year. But large and small value stocks did much better.  Combining the S&P 500, large value and small value asset classes into a “Diversified Stock Index” resulted in a gain of +11.8%, +4.5% annually more than inflation.

Add periods of higher inflation to the list of situations where stocks have worked best.

Stocks Are Great For Spending

Bonds, with regular coupons, are often thought of as ideal for income.  Stocks are traditionally earmarked for appreciation, without sufficient ongoing cash flow to support retirement spending.  But if you consider sales of shares along with typically growing dividend payouts, stocks have also been the best income-producing asset class.

The most difficult 20-year period to generate an inflation-sensitive income stream in history was the period from 1966-1985.  Inflation rose over this two-decade stretch faster than any other in modern times, averaging 6.4% per year.  A hypothetical retiree who started the period with $1M, wanting $50,000 per year in inflation-adjusted income, needed an annual paycheck of over $171,000 by 1985.  Required withdrawals over these two decades were more than $2M. 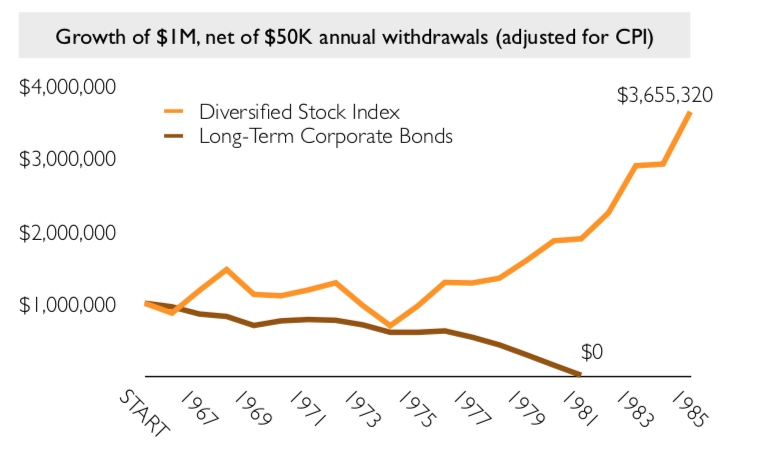 If they had invested in a portfolio of long-term corporate bonds to generate this ongoing income stream, they would have run out of money in 15 years; bond returns didn’t keep pace with the growing withdrawal needs.  If they invested in the diversified stock index mentioned previously, the $1M grew to over $3.6M in 1985; long-term stock returns far outstripped spending requirements.  “Safe” bonds left you bankrupt, while “volatile” stocks helped secure your financial legacy.

During difficult times when income requirements are most stretched, stocks have historically been the best approach to support long-term spending needs.

The perception is there's always something to worry about with stocks.  They’re too high, they’ve gone up too much, or they’ve been losing money.  It always seems like a tough time to be a stock investor.  The reality is far different.  Stocks have been a remarkably and consistently profitable investment, have offered considerable diversification benefits, succeeded in a variety of challenging environments, and worked well for investors whether they were saving for the future or in current spending mode.  When the facts emerge, it’s clear that stock investors have a lot to be thankful for.