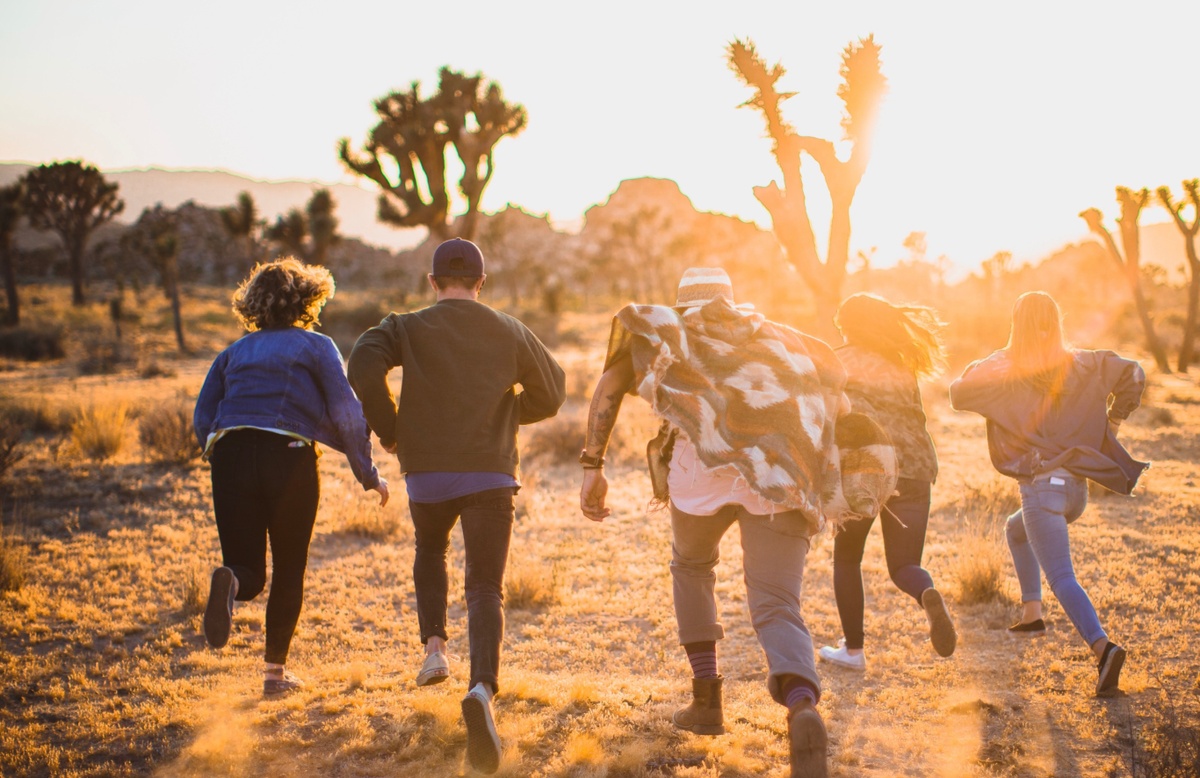 Investing is the only area of our lives where we celebrate higher prices and bemoan lower ones.  Think about it, whether you’re shopping for groceries or a new car, the lower the price for the things you want, the more you are apt to buy them.  But not so with investing.

When our investment statements show we have more money than we did last month, last quarter, or last year, we generally feel better and even consider adding more money to our portfolios.  When values are down, as they are this year, we think less of our investments, and some people even consider selling them—at lower prices!?!—thinking we’ll get back in when things get better (and prices are higher).

Buy high/sell low investing behavior costs us a lot over time; I’ve called it the biggest cost of investing.  The average investor in the last decade has earned a 1.7% per year lower return on their mutual funds than the funds made because they bought and sold at the wrong time.  And it isn’t just the “average” investor that pays this behavioral cost.  In The Bogle Effect, Eric Balchunas tells a story (p. 136) of cost-sensitive Vanguard investors in their Growth and Value Index Funds who from 1992 inception through 2019 earned 4.5% per year in each fund, even though both funds had returns of 9% per year!  They gave up half their potential return by going to Growth after a good run and then hopping on the Value Fund after it outperformed, only to see the cycles reverse soon after making the change.

This behavior seems crazy to me.  We should treat lower prices on our investments like everything else: an opportunity or at least a reason for optimism.  Why? Higher prices generally lead to lower future returns, but the opposite is true of lower prices—they lead to higher future expected returns.  Simply put, the less you pay, the more you’ll get.  Right?

Of course, we’re not just going to rely on old axioms; we need to work this out with evidence.

Over the entire period from January 1985 through July 2022, the Dimensional Core Plus 100/0 Wealth Index averaged +11.2% per year and +9.9% over all rolling 10-year periods.  Keep these returns in mind.  The index also had 11 different periods where it declined by at least -10%; the average of all these declines was -22.7%.  The long-term cumulative returns, as well as the numerous temporary setbacks, can be seen in the chart below. 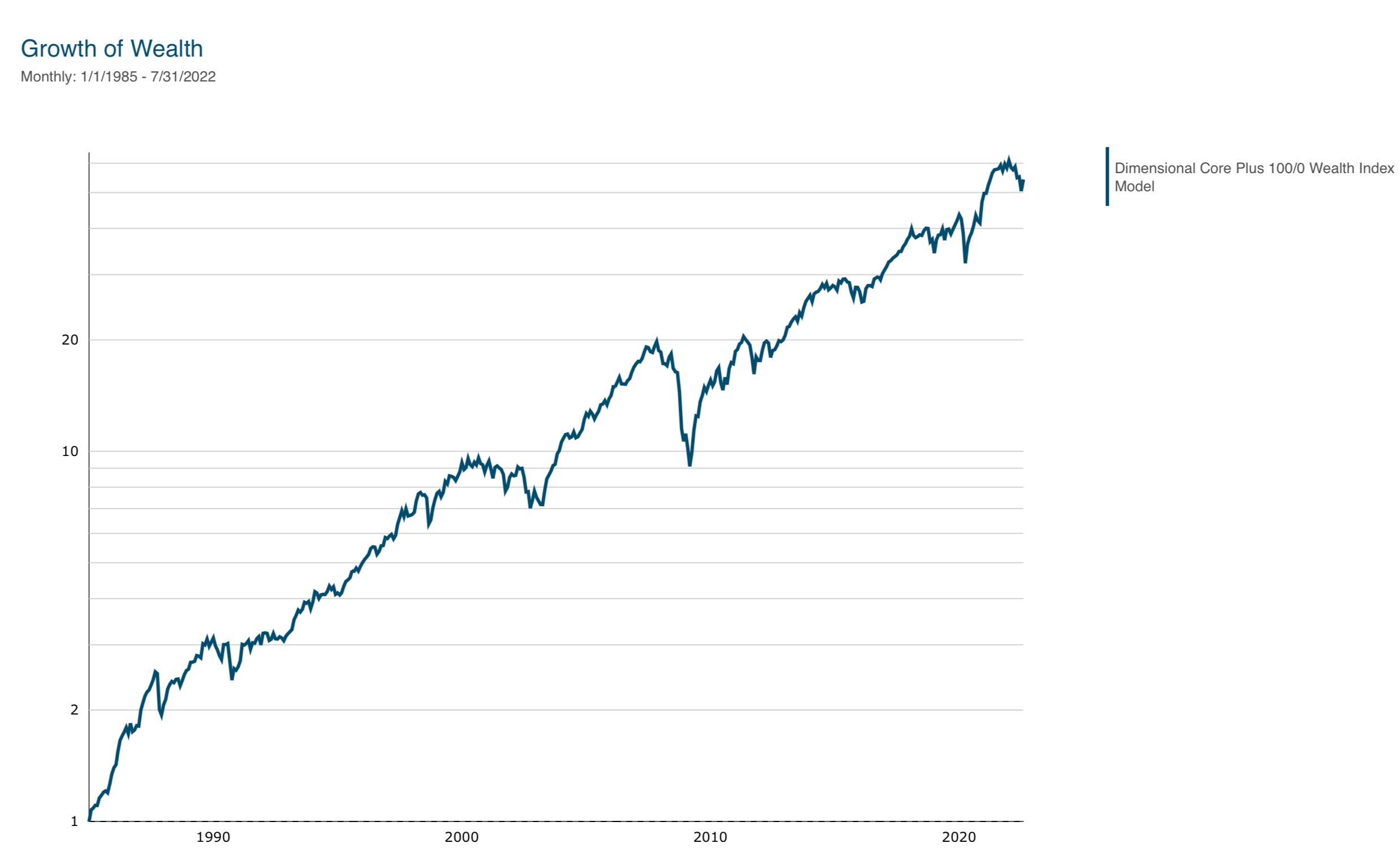 Next, to determine if a decline, and the resulting lower prices, tend to lead to higher or lower future returns, I looked at the remainder of these 10-year periods AFTER the decline had ended.  In the example above, I then looked at the returns from December 1987 through August 1997 (which was +13.5%/yr).

What about maintaining the 10-year window and looking out an entire decade after the decline?  Continuing our example, what about December 1987 through November 1997 (+13.2% in this case)?  Overall, were future decade-long returns higher or lower than before the declines?  Again higher.

For the full 10-year periods after the -10%+ declines end, the average return on the Dimensional Core Plus 100/0 Wealth Index was +12.5% per year, much higher than the +8.6%/yr average decade return starting with the decline.  12.5% isn’t as high as the +13.1% for the remainder of the initial 10 years, but that’s because we’re adding more months, and in some cases years, to our observation.  The farther away we get from the initial recovery—which is always where returns are highest—the lower the returns tend to get.  But the fact remains—after a decline, and in the midst of lower prices, future expected returns are much higher.

I realize that looking at returns after each of these declines ended has an issue with hindsight bias—we didn’t know how far the index would fall at the time.  Were future expected returns higher in the middle of these declines too, when (unbeknownst to us) the declines still had further to go?  Or did we have to wait until the decline had ended to see higher future returns? 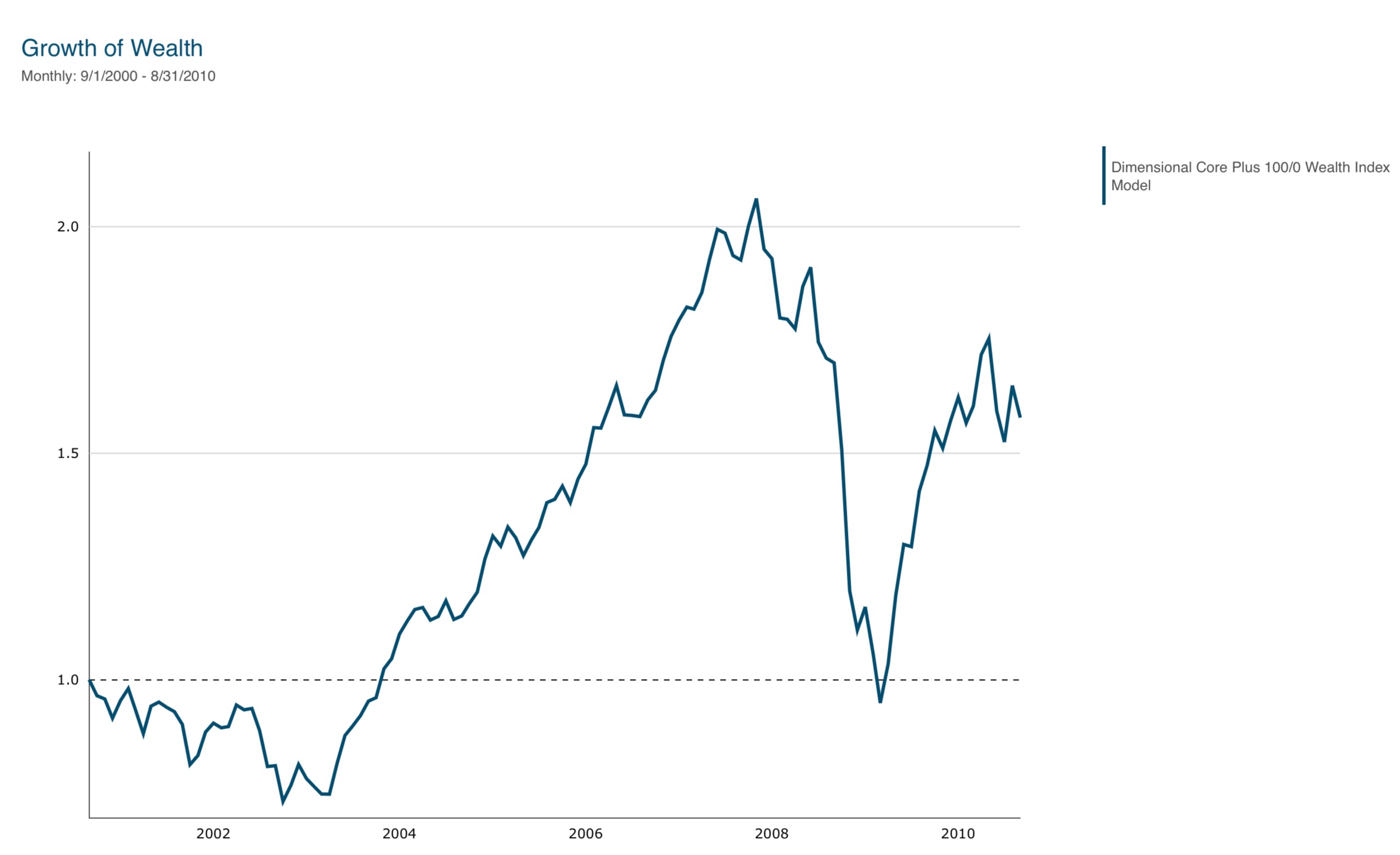 So we see that lower prices don’t always mean they can’t get a little lower still; the lower they go, the higher the future expected returns will be.  In other words, the more significant the decline, the bigger you should expect the recovery to be. 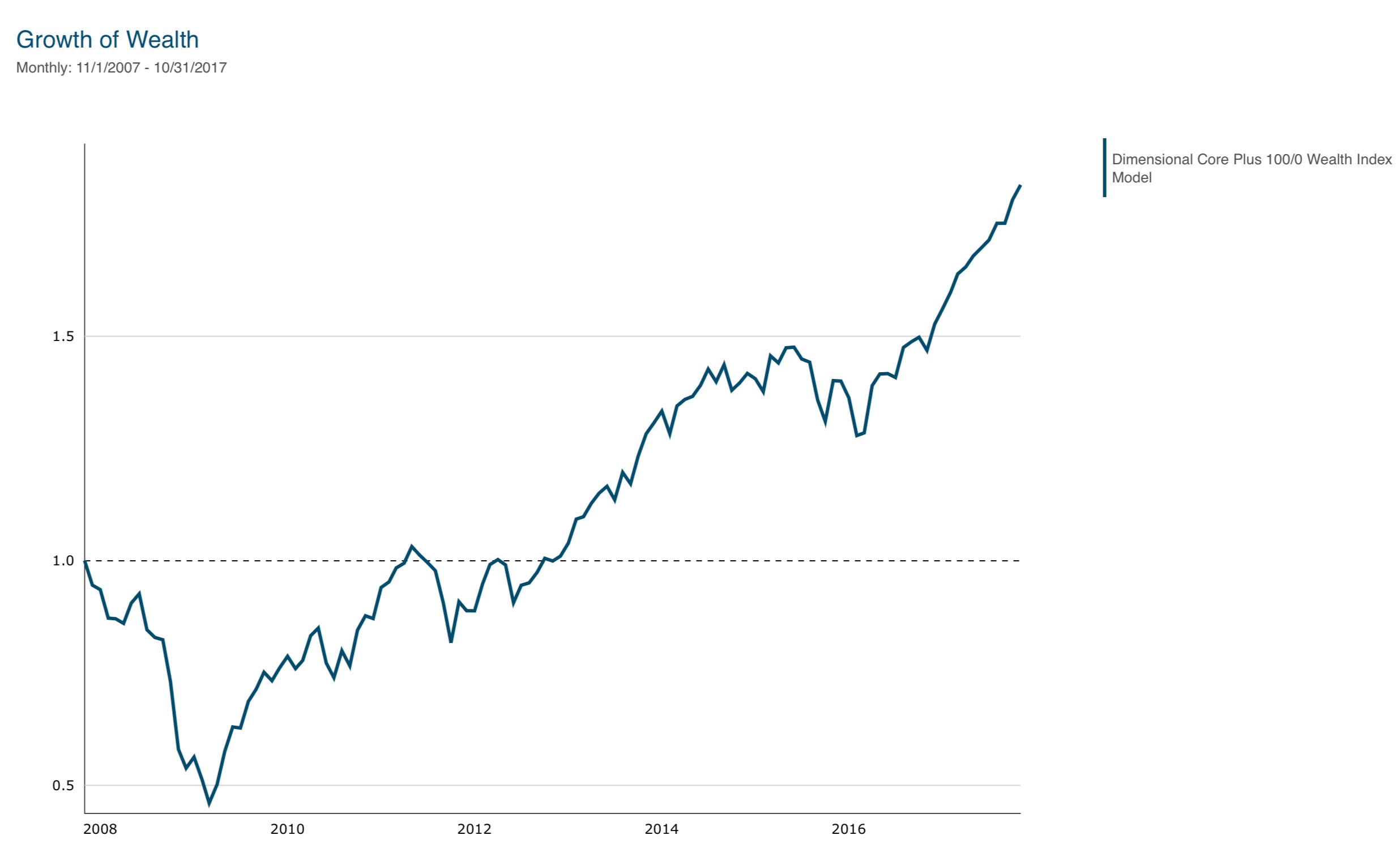 Despite a total decline of -54%—the worst loss for a diversified stock portfolio since The Great Depression—we didn’t see the cumulative loss eclipse -20% until after the September 2008 plunge triggered by the bankruptcy of Lehman Brothers.  From November 2007 through September 2008, the Dimensional Core Plus 100/0 Wealth Index had fallen by 26.9%, but unbeknownst to many, it still was only 1/2 way to its eventual bottom.

What does this mean for investors? Even a well designed portfolio that is perfectly appropriate for your goals will sometimes go down.  This is not a reason to doubt the portfolio or to become pessimistic about it, and it certainly isn’t a reason to stop contributing to it or sell out of it.  Lower stock and portfolio prices reflect new (worse) information and expectations about the economy’s future, interest rates, corporate earnings, and other variables that impact equity values.  And as we’ve seen, when prices are temporarily lower, future returns tend to be much higher and higher than average.

This doesn’t mean that a decline cannot continue or get worse; it just means that if prices decline further, expected future returns will climb even higher.  Your job as an investor is not to try and predict what will happen next and act on it.  It is to earn the full return that markets offer to achieve your long-term goals.  Suppose you mishandle declines or disappointing returns by shutting off your savings plan or selling out of it.  You will most likely turn a temporary drop into a permanent loss that could compromise your chances of financial success.

Remember Dimensional co-founder David Booth’s saying about temporary declines and the opportunity they create: “you’ve seen the risk, you might as well stick around for the reward.”

Are you struggling to create a sensible investment plan given the uncertainty of today? Are you finding it tough to stick to the plan that you have? Would you like to chat about your situation and whether Servo could help? If so, schedule a 15-minute call with me here﻿.

Details of Dimensional Core Plus 100/0 Wealth Index available upon request.