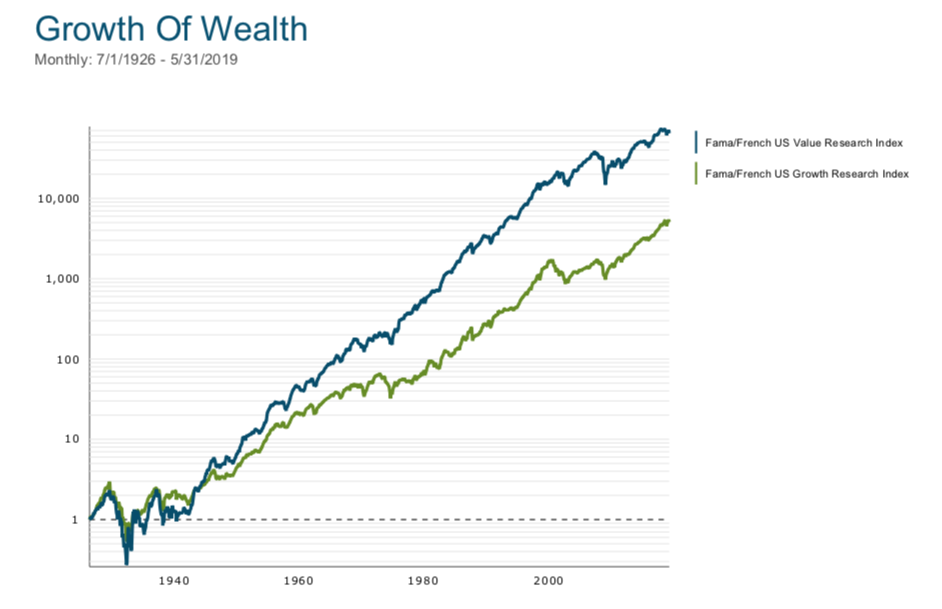 “What’s wrong with value stocks?”  You can find a version of this headline almost daily if you look hard enough.  Articles are referring to the fact that low-priced value stocks have underperformed high-priced growth stocks over the last 10 years (12 if you go back to 2007).  That wasn’t supposed to happen.  From 1926 through May 2009, the Fama/French US Value Index beat the Fama/French US Growth Index by almost 4% per year: +12.7% for value versus +8.9% for growth.

How bad has value done over the last 10 years for pundits to be questioning whether value stocks are dead?  That depends on your perspective.  If you expected +12-ish percent returns, as history would have predicted, you’ve been quite happy.  The Fama/French US Value Index has gained +12.2% per year over the last decade through May, just 4% less than its long-term average.  If you expected almost 4% per year higher returns than growth, you’ve been let down.  The Fama/French US Growth Index has almost doubled it’s long-term return, averaging +15.7% per year, 76% higher than the historical record!  Value returns have been normal, growth returns are way out over their skis.

What's Up With Value?

The first question to ask about the lack of a value “premium” over growth stocks is: Has this ever happened before?  The logical answer is yes.  If value beat growth over every 10-year period, who would bother to buy growth stocks?  No one would bet against a sure thing.

The data confirms this.  Over all 10-year periods since 1926, value has outperformed growth 83% of the time (822 of 996 rolling periods), by an average of +4.1% per year, which means it has UNDERperformed almost 20% of the time.  Should we expect to trail growth over decade-long stretches? No.  Has it happened before? Absolutely.  Why is this still surprising to investors, advisors, and financial journalists? Who knows, but if we guess that most people don’t know history, we’d be off to a good start.

How do we put these outcomes in perspective?  Let’s compare the value premium to the “equity premium,” or the average return of the US stock market (CRSP 1-10 Index) to “risk-free” 1-month T-bills?  Over the same 10-year rolling periods, stocks have only outpaced T-bills slightly more often than value beat growth: 85% of the time (851 out of 996 periods).  The average outperformance is also a bit higher: +6.7% per year.

Why compare the return of stocks within the market with the return of the stock market versus T-bills?  Aren’t all stocks basically the same?  Not at all, it turns out.  During the 17% of periods when value UNDERperformed growth, the overall stock market did quite well, beating T-bills by an average of +5.3% per year.  Value stock underperformance doesn’t necessarily mean negative returns, just lower returns compared to higher-priced stocks.  But when stocks do poorly, underperforming risk-free T-bills, the value side of the market tends to shine on a relative basis.  While value has outperformed growth by an average of 4.1% per year during all decades, that number rises to +4.9% per year, 20% higher than average, during only the decades where stocks trail T-bills.  While value stocks tend to be riskier than growth stocks on a stand-alone basis, they tend to reduce the risk of low long-term portfolio returns due to their diversification benefits.  The price of this is that value stocks might hold you back when growth stocks are shooting through the roof.

Does The Past Still Apply?

Finally, this data covers a long period of time, and maybe if past periods of value underperformance were too long ago they could be irrelevant to modern markets.  This turns out not to be the case.  Possibly the greatest puzzle of all regarding the bearish tone about value investing is how we could have lived through an identical period less than 20 years ago but no one remembers?  Any investor who’s been around for even an intermediate period of time should remember this quite well.  But as Georg Wilhelm Friedrich Hegel once said, “We learn from history that we don’t learn from history.”

Skate To Where The Puck Is Going To Be

What happened, in the intervening years between 2000 and June 2009, you might ask?  The Fama/French US Value Index outperformed the Fama/French US Growth Index by 5.6% per year, almost 40% more than it’s long-term 10-year average!  The overall stock market wasn’t so fortunate, the broad market had one of its worst stretches in modern times with a negative return, underperforming 1-mo T-bills by 5.5% per year.  Unlike the 1990s and 2010s, where every diversified stock investor who held on made money, in the 2000s, the only way to earn a positive return was to hold value stocks.  Growth investors lost a significant sum.

It’s tough to sit tight for a decade or longer while your investment approach underperforms the market.  But value investors have reasons for optimism: a long history and solid fundamental principles underlying the expectations that value should outperform growth over time.  What’s more, we’ve seen markets like this one before.  Contrary to the obituaries being written about value stocks, now might be the best time in modern history to be high on a low-priced approach to stock investing.