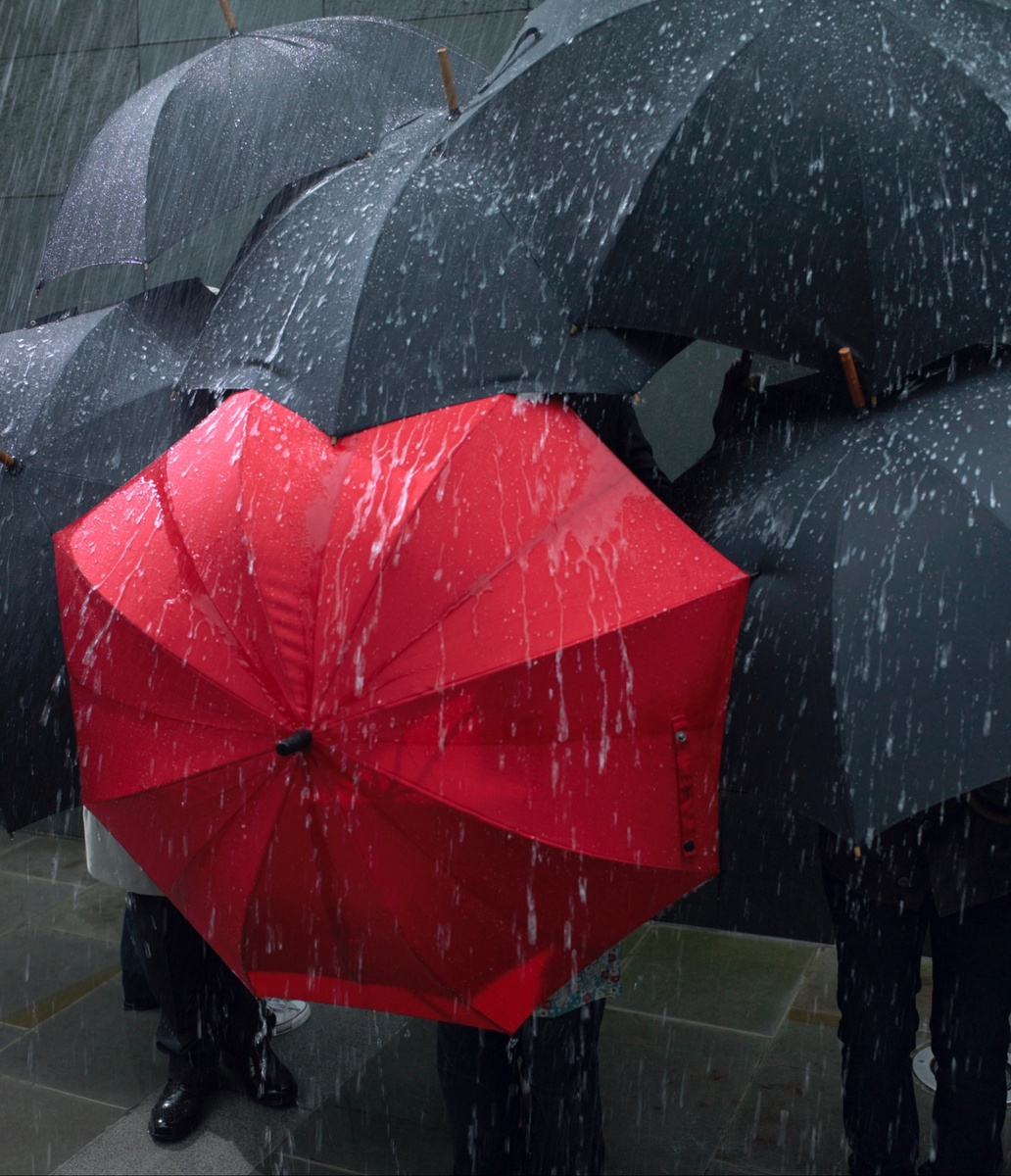 The Bonds Are Alright

No one enjoys a stock market decline, but asset class investors don’t have much to complain about this year.  While the S&P 500 is down over 17% and the international stock MSCI World ex-USA Index has declined over 22% through October 31st, DFA’s US and international large and small value funds are down far less: -6.7% and -2.5% for the US funds and -13% and -20.1% for the international strategies.  After a surge in October (too late to be reflected in quarterly reports), a diversified all-stock asset class portfolio is down only 10.5% for the year, just half the -21.1% decline for the global stock MSCI All Country World IMI Index.

Bonds, on the other hand, have behaved differently than expected.  In most stock declines, high-quality bonds hold their value or even appreciate slightly.  Not so this year. Our core short-term bond strategy, the DFA Five-Year Global Fund, is down -7.1% through October, a sizeable decline for a conservative approach.  The worst 12-month return for DFGBX before 2022, dating back to the fund’s inception in 1990, was just -4.3% in 1994 (another period of rapidly rising interest rates).  What’s going on?

Inflation and rapidly rising interest rates are to blame.  As you probably know, when interest rates rise, the prices of bonds temporarily decline.  At the end of September, the DFA Five-Year Global Bond Fund had a yield-to-maturity of almost 5%, compared to just 1% a year ago.  This can’t be overstated; a 4% increase in short-term interest rates in just 12 months is unprecidented.  When interest rates go up that that fast, all bonds are going to drop, and interest payments won’t be enough to offset the decline right away.

As significant as a -7% decline is, let’s first put this in perspective.  It’s not as bad as the -15.7% decline on the broad Bloomberg Aggregate Bond Index (average maturity of about seven years) and not nearly as bad as the whopping -31.6% loss on the Bloomberg Long-Term Bond Index.  Even the Bloomberg Treasury Inflation-Protected (TIPS) Bond Index is -12.5% in 2022.  Staying with shorter-term bonds with maturities of five years or less is about sacrificing a little bit of potential return for a lot less interest rate volatility.  That’s certainly been the case this year.

Next, let’s ask, with interest rates much higher now than they’ve been in almost 15 years, should we consider a different bond strategy? Should we “get more creative,” as one client put it? I don’t think so.

Even this simple yield comparison ignores the added benefit of global diversification that we get with the fund, as well as DFA’s ongoing management that adjusts the average maturity of the portfolio to always reflect the highest yielding opportunities within the short-term, high-quality segment of developed global bond markets.  For example, one year ago, yields on very short-term bonds (1 to 2 years) were close to zero, so DFGBX had a longer maturity of about four years to try and earn some interest. As short-term rates have risen dramatically this year and it’s now possible to get similar or better-expected returns on shorter maturities, the funds’ holdings and average maturity have been cut in half to just about two years.  You’re not going to get this sort of dynamic, hands-on management and added potential for capital gains in an individual bond ladder and certainly not a plain-vanilla bond index fund.

With DFGBX, you never have to worry that you’re out of step with interest rates; the fund’s “variable maturity” approach is implemented daily so that the fund is always in the “sweet spot” of the short-term bond market.

Finally, what about this significant rise in interest rates and the associated decline in our bond values?  We know when stocks decline, that if we hold on patiently, we should eventually be rewarded.  Will we ever get this bond loss back?  The answer isn’t just ”yes”; it’s that we’re actually better off now than we were before!  This is probably a surprise so let’s look at the math of rising interest rates and bond returns.

The example below compares two scenarios for an investor with $100,000 in a portfolio of bonds with an average maturity of five years (the maximum duration of the DFA Five-Year Global Fund). In the first scenario, the portfolio is purchased with a yield-to-maturity of 1%, and interest rates never change; the portfolio earns 1% annually with no capital losses from rising interest rates. In the second scenario, the portfolio of 1% bonds immediately experiences an increase of 3% in interest rates (similar to this year) so that its yield is now 4% per year, but prices have temporarily dropped by almost -15% (for every 1% increase in interest rates, a bond portfolio with a five-year maturity declines by 5%).  The assumption is that no future interest rate changes occur so that we can isolate this one change on the bond portfolios.

As the graphic shows, Scenario 2 takes an immediate hit but starts to recover more quickly because 4% yields spur much more growth than 1%. At the five-year mark, the two portfolios are identical—Scenario 2 has made up all of its lost ground, and the rate of returns is equal.  But beyond five years—which long-term investors should care most about—we see that the higher interest rate in Scenario 2 results in much greater wealth.  Scenario 2 has 17% more wealth at the ten-year mark, and the 15-year mark, Scenario 2 has 39% more wealth; at the 20-year mark Scerario 2 has 67% more wealth!

This shows that despite the short-term disappointment for bonds so far this year, we’re much better off today than we would have been if we were still stuck with interest rates of next to nothing.  Bonds are a much better investment than they’ve been in a long time. 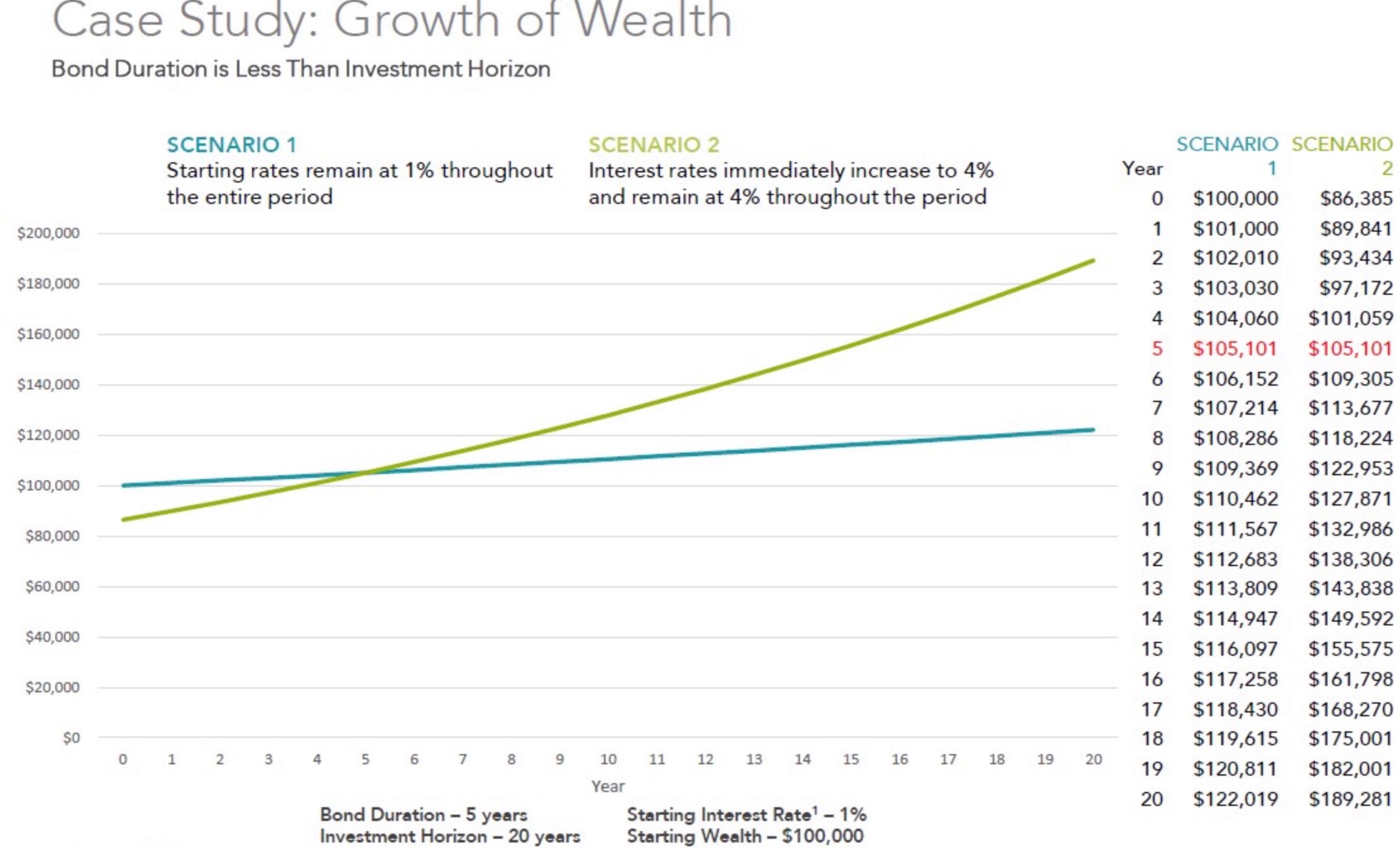 With a diversified portfolio, it’s always something.  Stocks are down this year, but the real story of 2022 has been the bad result for bonds.  The traditional relationship between stock and bond returns certainly hasn’t held up as we usually expect; in some cases, (longer-term) bonds are down more than stocks.  But this is because of the nature of this decline—bonds tend to hold their value during non-inflationary periods of economic weakness (that cause stock prices to decline).  When interest rates rise due to higher inflation but the economy is still growing, stocks and bonds can act similarly. The longer-term the bond the more similar the co-movements with stocks.

This year, nothing has happened to change my view on bonds or how I think we should invest in them.  For long-term investors, most of your portfolio should be in a diversified stock portfolio with a strong emphasis on small cap and value stocks.  A modest allocation to bonds can act as a lower-risk (but not “no risk”) component of a balanced portfolio and be sold during periods when stock prices have plummeted, but ongoing income is still needed.  There’s no need to change our bond approach, Dimensional is making the necessary adjustments in real-time and we’re benefiting from their consistent management, even if recent returns don’t seem to show it.  As the illustration above highlights, the bonds are alright.