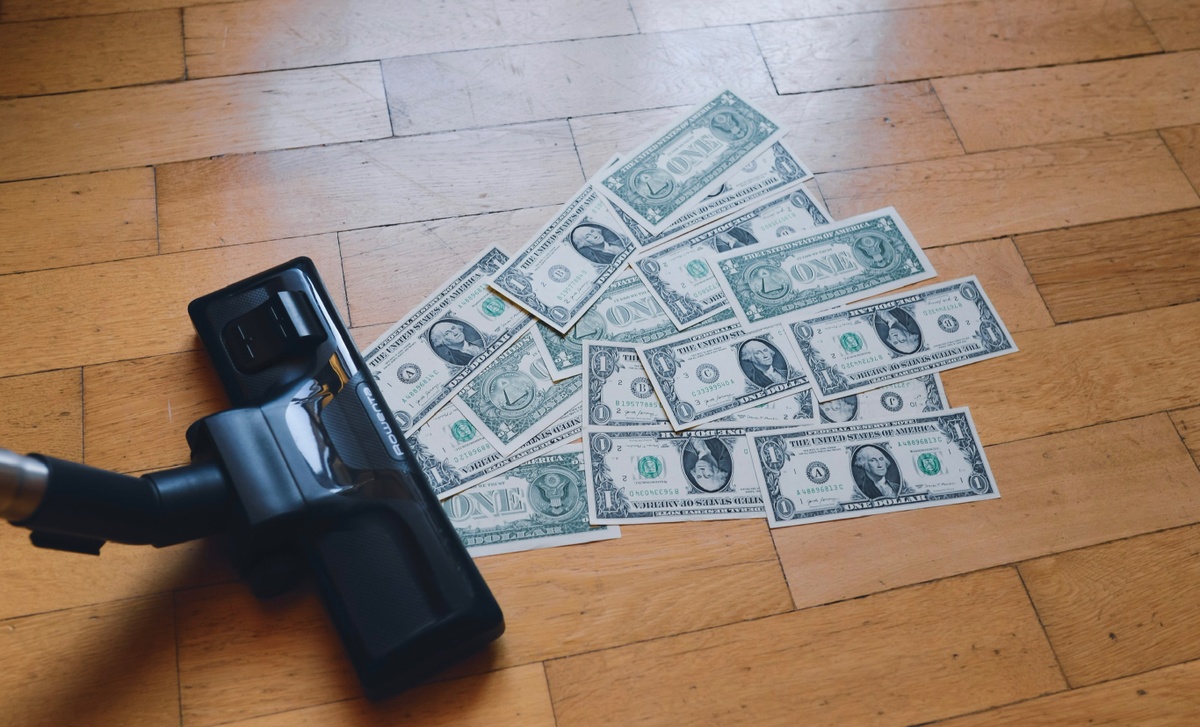 How To Whip Inflation In Your Investment Portfolio

A recent WSJ headline announced that “US Inflation Hit 7% in December, Fastest Pace Since 1982.”  For older investors and students of history, our recent inflation surge brings back memories of the 1970s, when inflation averaged 7% for over a decade.  You could find Americans sporting “WIN” buttons supporting President Carter’s campaign to “whip inflation now.”

Is inflation a problem for you as an investor, and if so, what’s the best way to whip it this time around?

Consumer prices—as measured by CPI—rose by 7% last year, the fastest annual increase since 1981, eclipsing even the 6% increase we saw in 1990 during the first Gulf War.  This means, roughly, that everything you spend money on this year will cost about $0.07 more per $1.00 than it did last year.  Obviously if you string together a few years of increases like this it becomes a lot more expensive to live comfortably than it once did.

Higher inflation and the resulting loss in the purchasing power of your money is the single biggest long-term risk that investors face, but most people don’t know this.  They spend more time guarding against short-term losses in their portfolios and not enough time addressing the long-term purchasing power risks of investing the wrong way.

How does the rate of inflation tend to influence stocks, bonds, and cash? To find out, I went back to 1927 and looked at all 12-month rolling periods and broke the level of inflation into four equal buckets—low, low/mid, mid/high, and high.  The table below reports my findings.

There is a lot of data in the table, but I can summarize it simply.

When inflation is “mid to high,” averaging 3-5% a year, stocks and bonds tend to have returns that comfortably exceed inflation.  For example, short/intermediate 5-Year Treasury Notes have averaged 6.8% per year, double the average 3.4% rate of inflation.  Stocks also did well—the S&P 500 averaged 11.4% per year, 8% annually more than inflation.

It’s only when inflation is in the highest quartile that some investment returns become disconcerting.  During these periods, inflation has averaged 7.9% per year, similar to 2021.  When inflation is high, bonds are very poor investments—5-Year T-Notes averaged only 5.3% per year (2.6% lower than inflation) and longer-term 20-Year Government Bonds got creamed, gaining only 3.4% per year (4.5% less than inflation).  Stock returns were a mixed bag.  Large growth stocks, as represented by the S&P 500 Index, earned an average of 9.6% per year—a good result in average times—but only 2% greater than inflation.  Only value stocks, and specifically small value stocks, had strong positive real returns.  The Dimensional US Large Value Index gained an average of +14.7% per year, almost 7% annually more than inflation, while the Dimensional US Small Value Index gained 21%, 13% more than inflation.

The problem with rolling periods is that they don’t illustrate consecutive periods of time representative of what investors experience.  Some of the highest quartile inflationary periods took place in the 1940s, some in the 1970s, and a few last year—looking at averages just strings all these periods together.  If we look at the 14-year period previously mentioned—1968-1981—we can observe a consecutive period of over 7% per year inflation.

Do the investment returns during this period conform to the chart above? 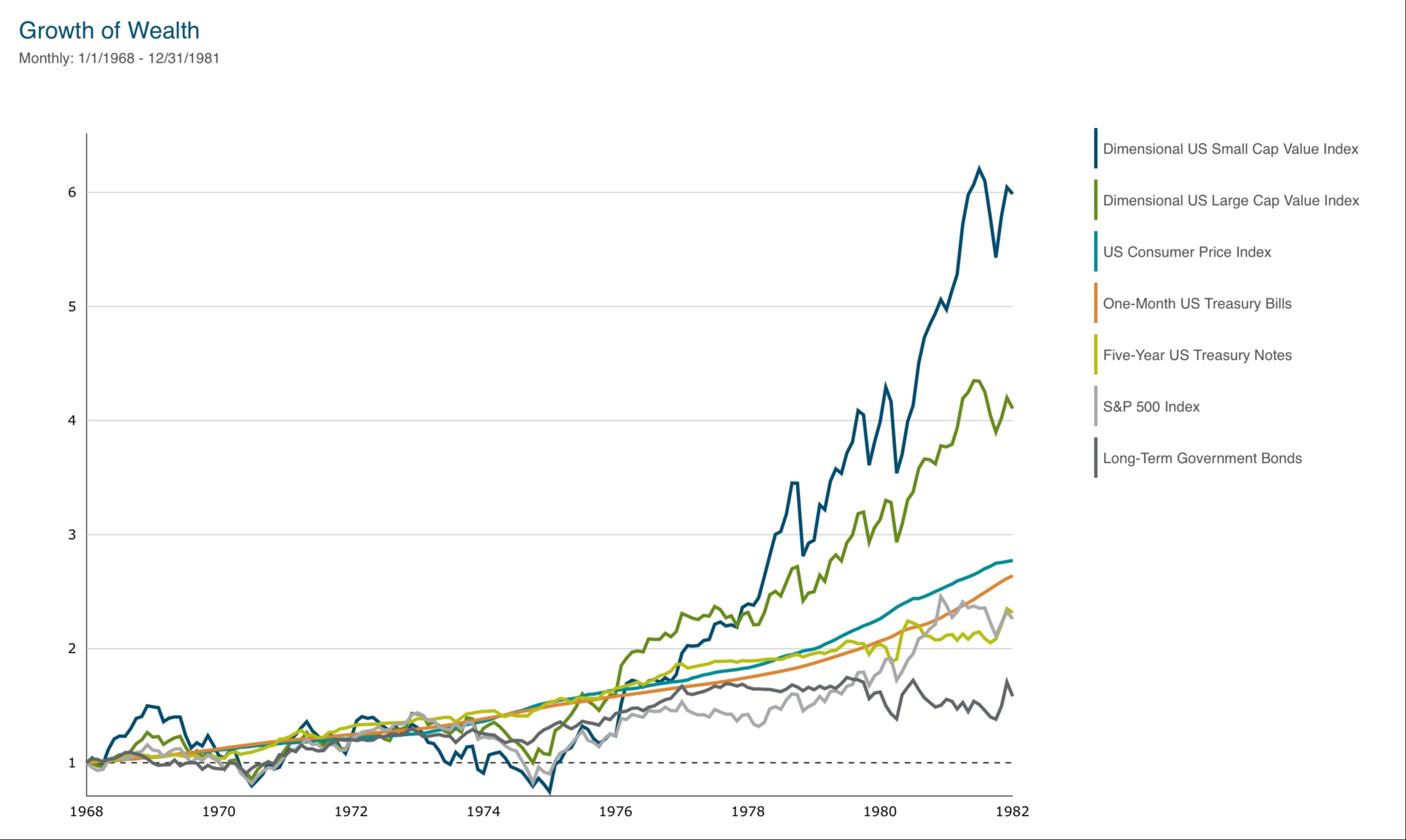 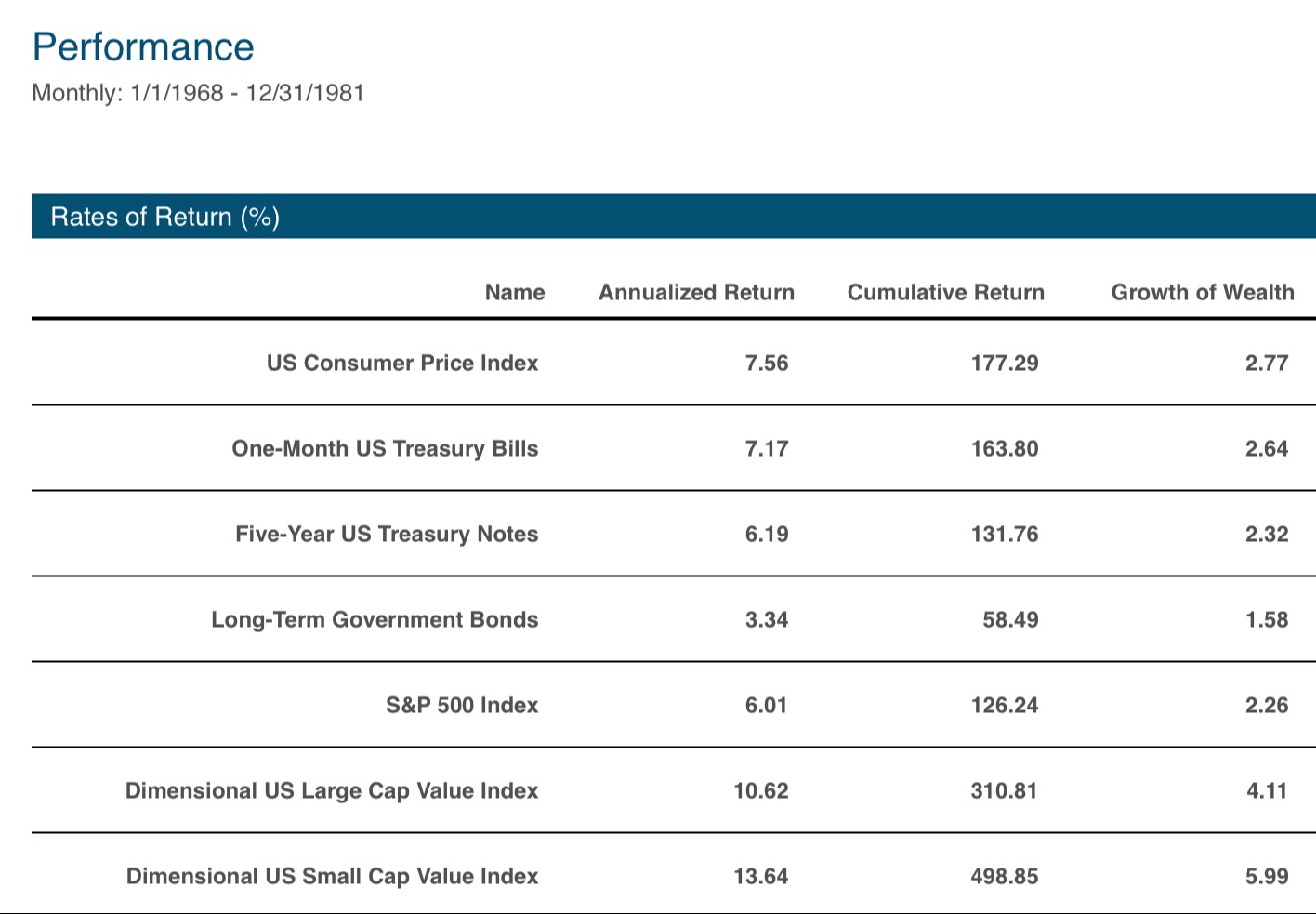 Bonds—represented by 5-Year Treasury Notes, underperformed inflation by almost 1.5% per year, and the longest-term bonds were dreadful, losing over 4% per year net of inflation.

But even large cap growth stocks had negative returns adjusted for inflation.  The 6% annual gain on the S&P 500 was even lower than the return on bonds, and 1.6% per year less than inflation.  It was ONLY large and small value stocks that had positive real returns.  The US Large Value Index beat inflation by 3% per year, the US Small Value Index outperformed inflation by 6% annually.

How To Whip Inflation Now

If history is any guide—and it’s the only one we have—the ways to invest to overcome periods of higher inflation are clear.

First, you can’t afford to go overboard with bonds.  Yes, fixed income is less volatile than stocks, but that lower volatily comes with much lower long-term returns and specifically lower returns during periods of higher inflation.  Long-term bonds in particular do very poorly during periods of higher inflation, so make sure the bonds you do hold are shorter-term and higher quality.

More specifically: if you’re saving for retirement, bonds are completely optional.  In retirement?  Hold enough in bonds to get you through a few years of a bear market in stocks, but no more.  To load up on bonds is to overemphasize short-term volatility and temporary losses at the expense of much more worrisome long-term inflation and purchasing power risks; this could be one of the biggest investment mistakes you make.

Next, you need to diversify your stock holdings.  Don’t even think about putting all your equity allocation in a basic index like the S&P 500 or Vanguard Total Stock Index.  These are good large cap growth holdings, but that asset class should be a relatively small part of your total portfolio.  To look beyond US large cap growth stocks, consider large and small cap value stocks, in the US and international markets.  Value and small cap stocks have higher long-term expected returns, tend to go up and down at different periods of time than US large growth stocks, and have historically had some of their best relative returns when inflation was highest.

In summary—to combat the potential for higher inflation, your portfolio should be equity oriented and diversified across value and small cap stocks in US and non-US markets.  As history has shown us, these core asset classes have offered more than sufficient returns during even the highest periods of inflation that would have allowed you to stay on track to reach your financial goals, while also producing strong returns during periods of lower inflation.  It’s not necessary to drift off into the world of commodities, alternative assets, or cryptocurrencies to try and protect yourself from inflation risks.