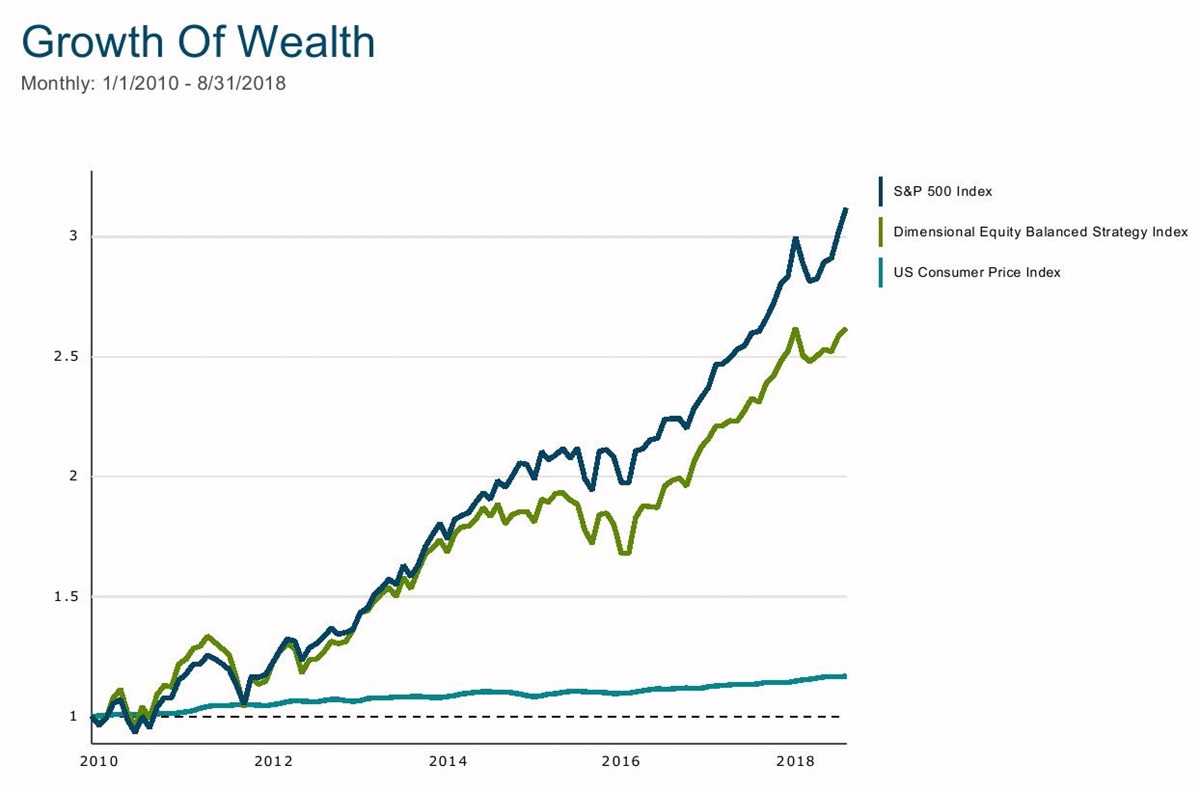 Diversification Works When You Need It Most

The S&P 500 has had a good run since the start of the decade.  From 2010 through August of 2018, the index has gained +14.0% annually.  Most other stock asset classes around the world have failed to keep pace.  The return on the globally diversified, small-cap and value tilted DFA Equity Balanced Strategy Index has done well but hasn't kept pace with the S&P 500, earning +11.7% per year.

But this isn't the type of market environment where you necessarily need diversification to pay off, the return on the S&P 500 is well above its long-term average of about 10% per year, especially considering the low rate of inflation this decade--just 1.8%.

A look back at previous decades finds that a diversified stock portfolio doesn't always outperform the S&P 500, but it tends to work when you need it most.

Most investors don't remember the 1970s, which is troublesome because it was a difficult decade and illustrates the risks of putting all your stock allocation in one asset class.  From 1970-1979, the S&P 500 earned +5.9% per year, but inflation (CPI) was +7.4% annually.  Net of inflation, S&P 500 investors lost money for an entire decade.  The diversified DFA Equity Balanced Strategy Index faired much better, as global diversification and smaller and more value-oriented stock exposure paid off.  Its return was +13.4% per year over this stretch. 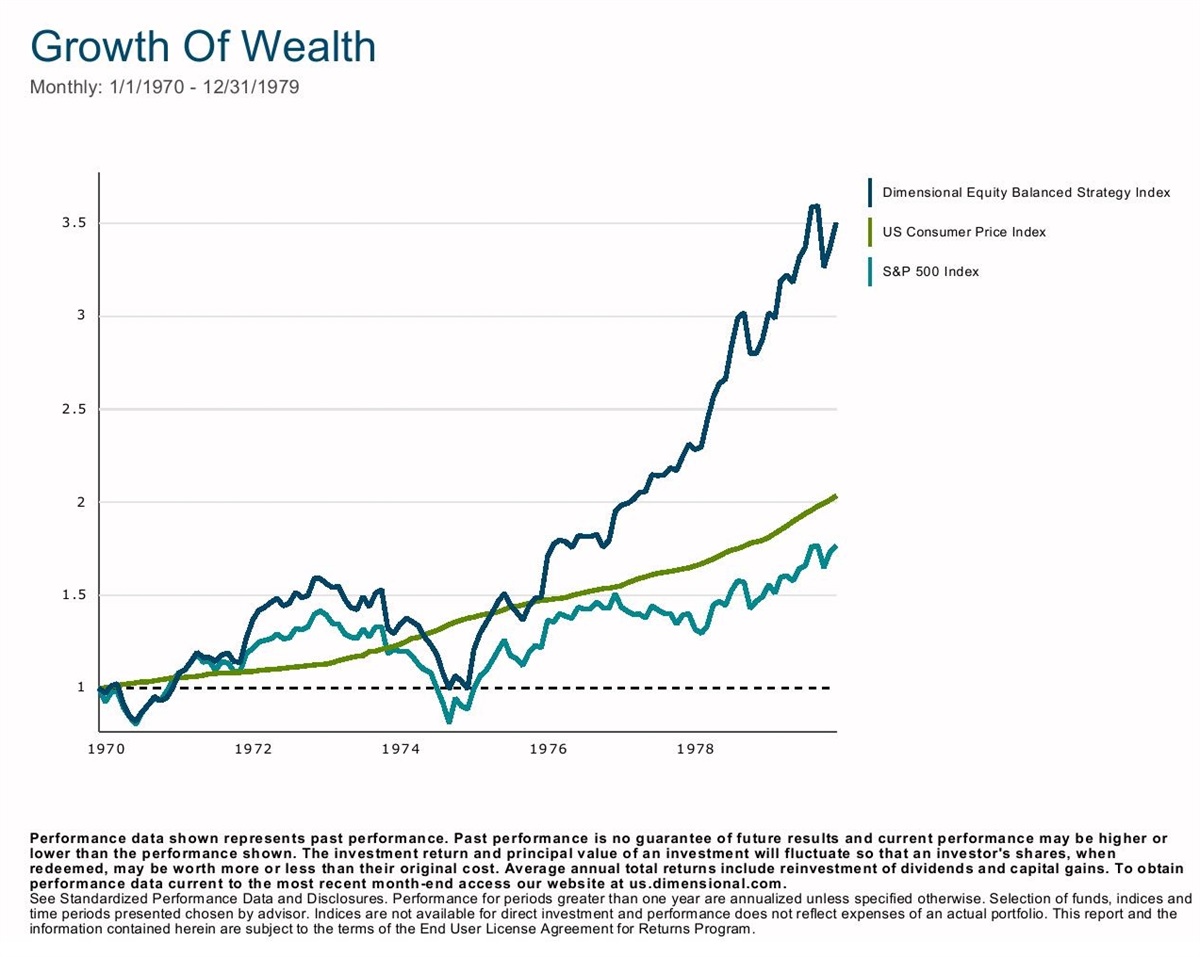 The 1980s were a good decade for investors no matter what you owned. This was one of the only periods in recent history where the S&P 500 had above-average gains (+17.6% per year) and the diversified DFA Equity Balanced Strategy Index performed even better (+22.0% per year). 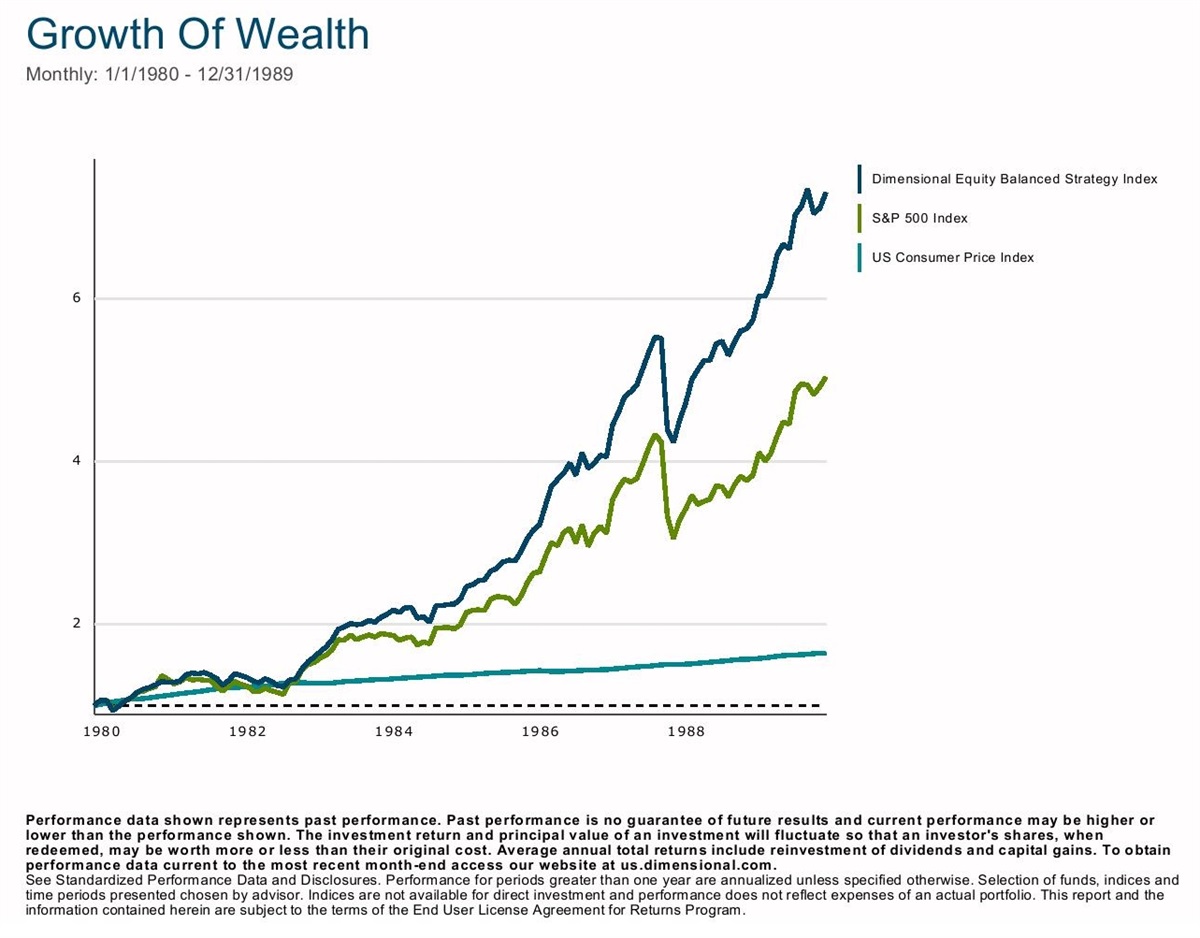 S&P 500 returns in the 1990s topped even the 1980s; the index gained a whopping +18.2% per year.  The diversified DFA Equity Balanced Strategy Index had performance as well, but its +13.7% per year return was several  below the S&P 500.  Even though the benefits of diversification weren't needed due to above-average returns from large-cap stocks, it was still common to see investors giving up on a diversified strategy to chase the hot asset class.  As we'll see next, this was a huge mistake. 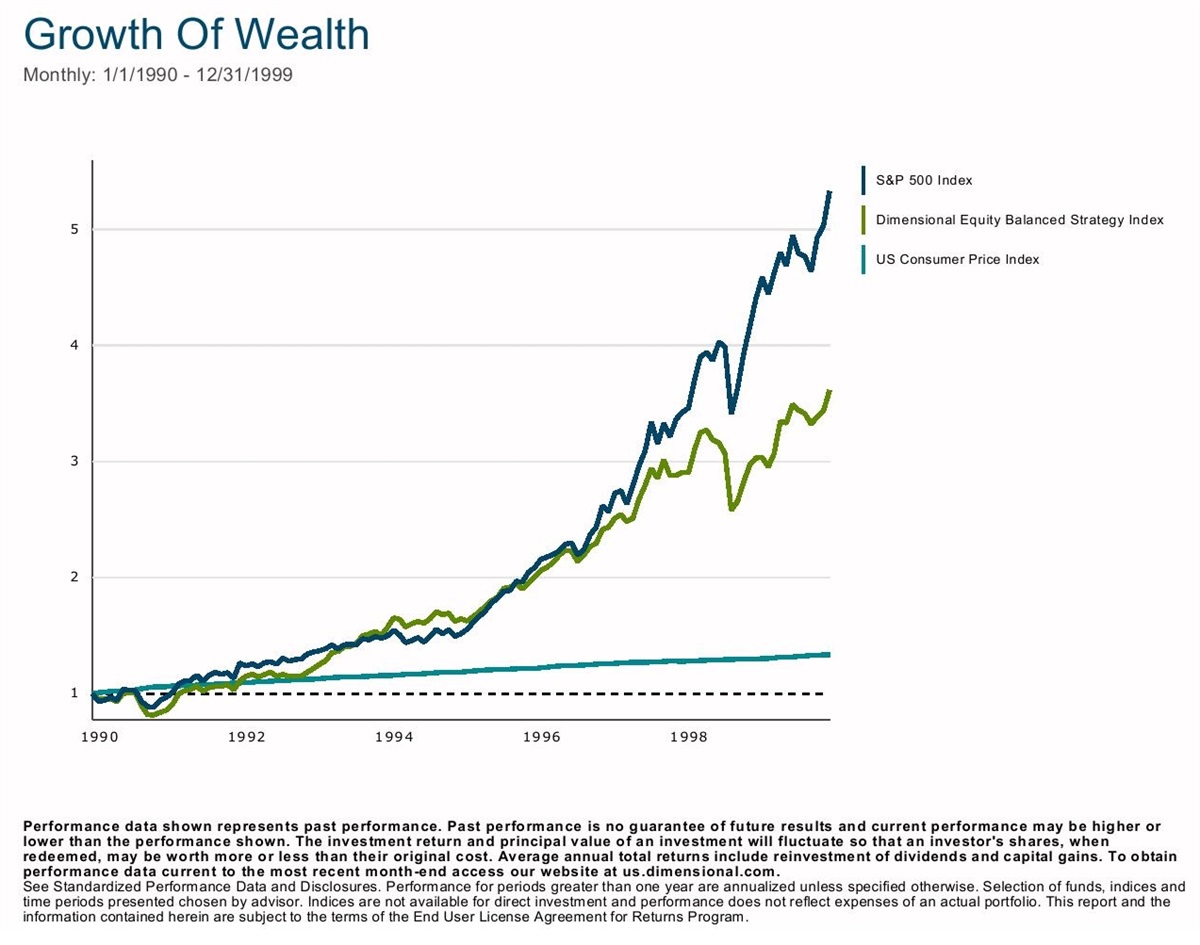 No asset class can exceed its long-term average forever, and investors who jumped out of a diversified portfolio and into the S&P 500 in the 1990s learned this the hard way during the 2000s.  The S&P 500 experienced its second decade in 40 years with a negative return after inflation.  This time, the S&P 500 had a negative nominal decline as well, losing -1% per year (-3.5% per year after inflation).  But once again, we find that broad asset class diversification could have saved investors from disappointment.  The DFA Equity Balanced Strategy Index outperformed the S&P 500 by 8.4% per year, returning +7.4% annually.  This was the best relative return (compared to the S&P 500) over an entire decade for the diversified DFA Equity Index, at precisely the time when it was needed most (the S&P 500 had its worst decade return).  It bested even the +7.5% per year outperformance during the 1970s (the second worst stretch for the S&P 500). 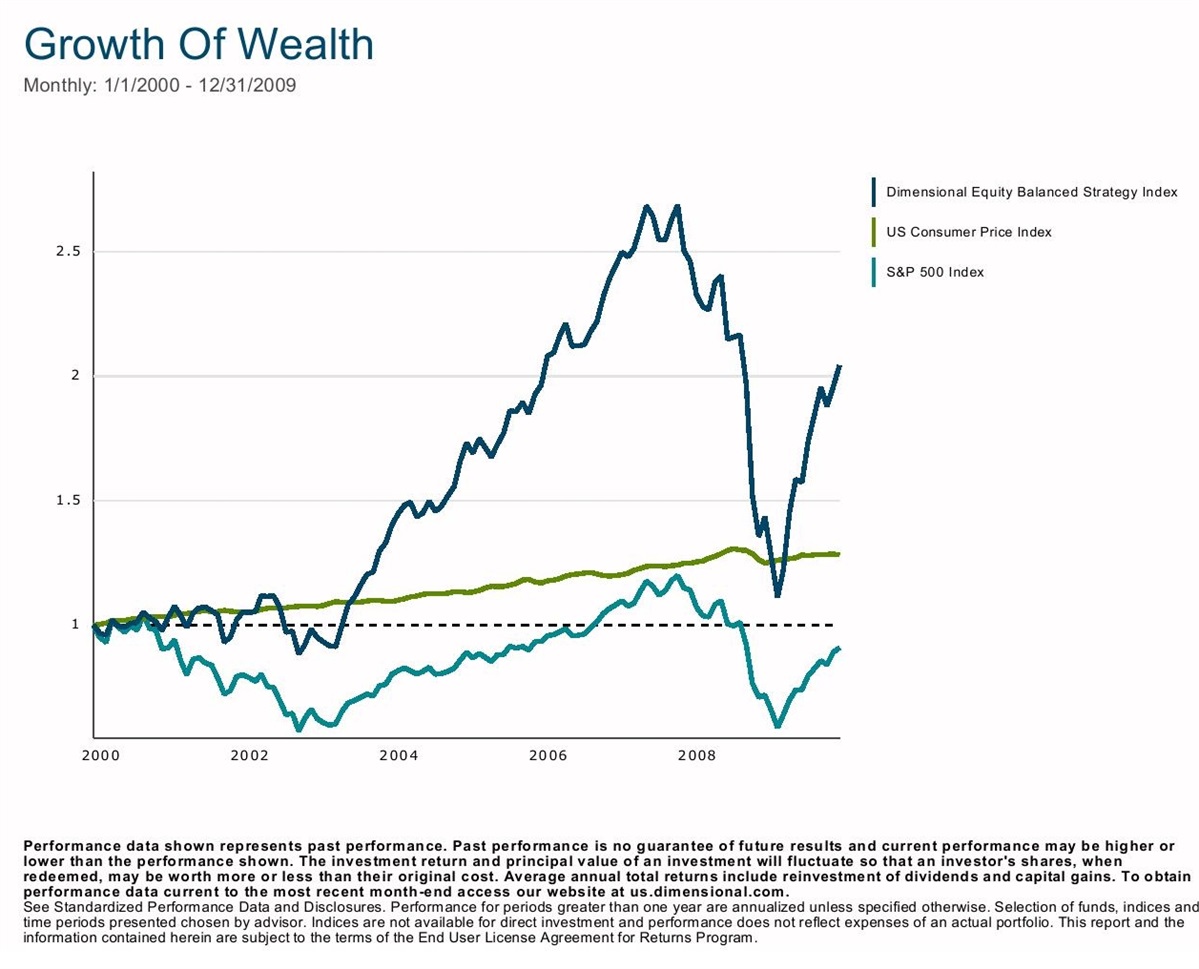 The 2000s were so good for the diversified index portfolio, in fact, that they totally eliminated the deficit built up (compared to the S&P 500) in the 1990s.  For the entire 20-year stretch, the S&P 500 earned +8.2% per year while the DFA Equity Balanced Strategy Index returned +10.5% per year. 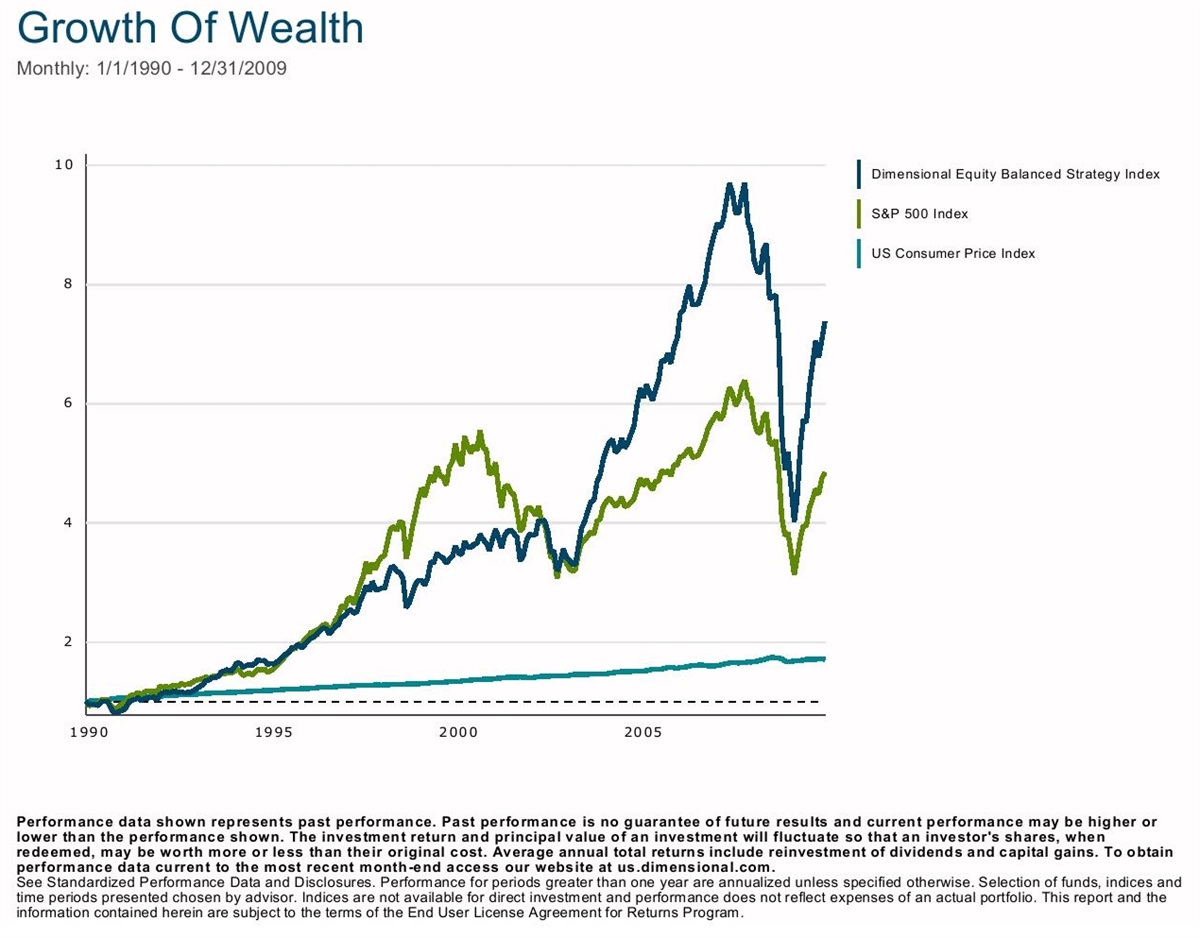 While we cannot be certain that history will repeat, it should none-the-less be comforting to diversified investors to know that there have been many periods when well-balanced portfolios have failed to exceed the return on the S&P 500, despite higher expected returns.  But these have typically been periods when the S&P 500 is experiencing above-average gains, not the type of environment where diversification is needed to generate even higher results.  When S&P 500 returns eventually disappoint -- often after a stretch of above-average returns -- a diversified portfolio seems to have its best relative returns.  Said differently, diversification works when you need it most.