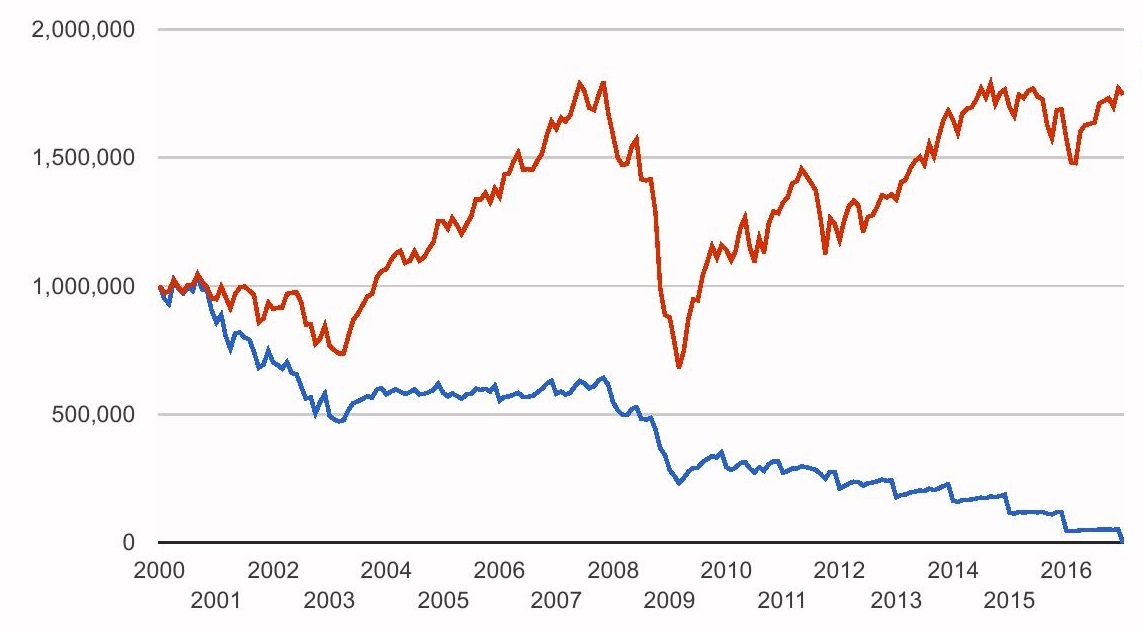 S&P 500 Index funds are all the rage.  According to Morningstar, despite net outflows from stock funds last year overall, the SPDR S&P 500 ETF raked in $18.6B in new investor assets.  Index funds with similar exposures to large US stocks, such as the Vanguard Total Stock Index, weren’t far behind, collecting $6B in net inflows.  Looking at the last 10 years of returns, you can understand why—the Vanguard S&P 500 Fund (VFINX) returned +13.4% annually; it gained value in nine out of ten years and its sole losing year saw the index slip just -4.5% in 2018.

For investors just starting out and dollar-cost-averaging into their ROTH IRAs or 401ks, an S&P 500 Index Fund can be a good foundational holding.  But what about as you age and prepare to retire?  Can a well-diversified large cap stock fund such as the S&P 500 (or a “Total” Stock Index) provide you the ongoing income you will need in your later years?  Let’s look at the data. 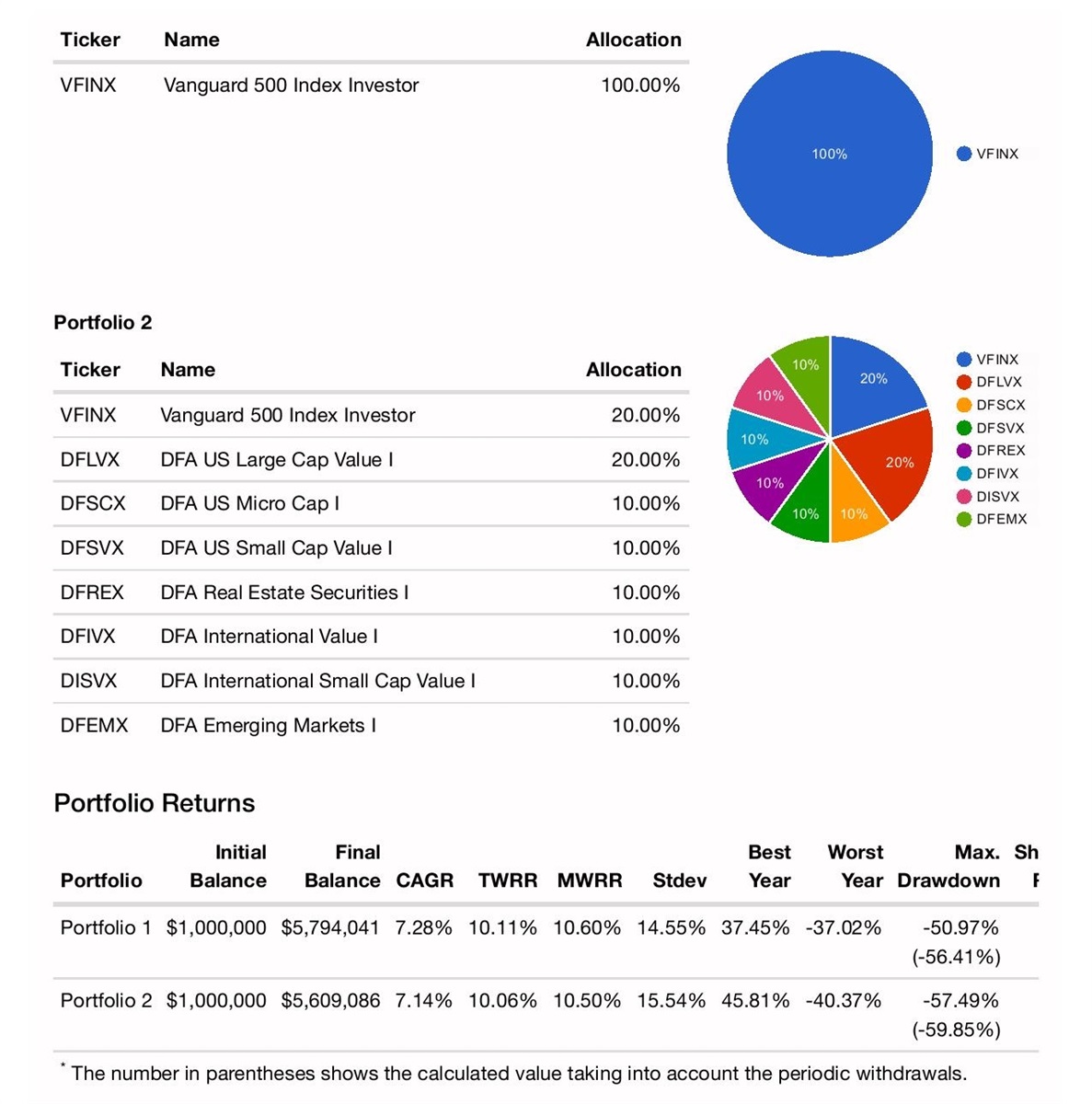 In fact, it was hard to do much better than the S&P 500 over the last quarter century.  Diversifying your US stock allocation across small cap and value stocks helped somewhat; the DFA US Large Value Fund gained +10.7% and the DFA US Small Value Fund returned +11.2%.  But international stocks underperformed US stocks so a globally diversified portfolio would have done no better than the S&P 500, also earning +10.1%.  A retiree who opted for a more diversified stock portfolio (the DFA Equity Balanced Strategy, courtesy of Dimensional Fund Advisors*), represented by "Portfolio 2," actually came out slightly behind, ending with $5.6M.  Not bad, of course, but not a compelling reason to give up the simplicity of an S&P 500 strategy.

But retirees cannot always rely on a strong bull market in US stocks to begin their retirement.  Large US stocks, like all individual asset classes, can go long periods of time with disappointing returns.  Even in 1995 we knew that for the 17 years ending in 1982, the S&P 500 had zero return in excess of inflation (the S&P 500 and the Consumer Price Index, or CPI both rose 6.8% per year).  Other stock asset classes such as small cap and value, performed much better.  You can’t retire successfully if your stock portfolio doesn’t beat inflation for a decade or more.

Sure enough, after five years of strong relative gains for the S&P 500 in the late 1990s, we once again experienced a long drought of disappointing returns for US large companies.  This would have been devastating for an S&P 500-centric retiree. 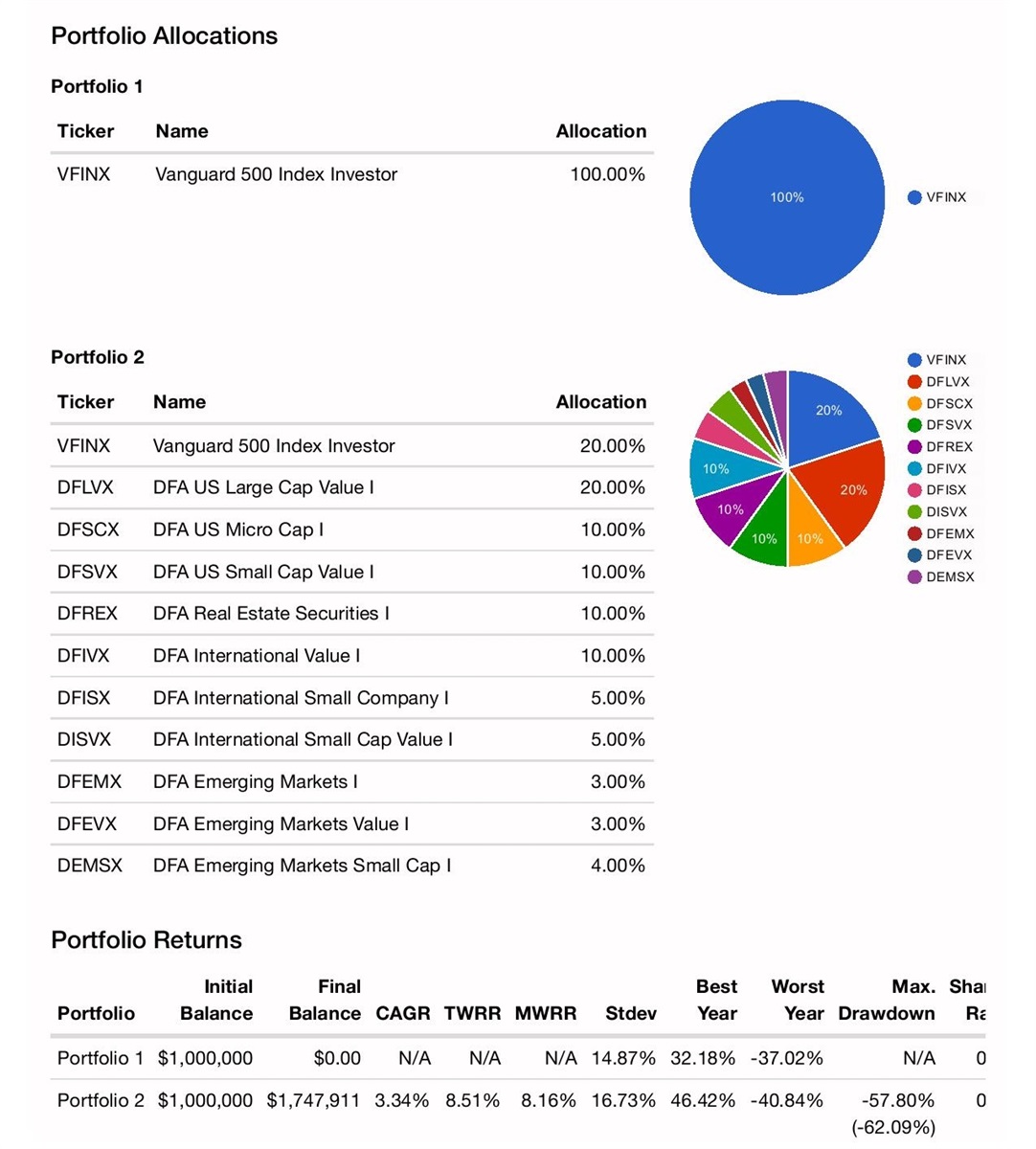 The period beginning in 2000 was also different for the diversified portfolio** example.  Much like recent years (where the S&P 500 has outperformed most other stock asset classes), value stocks, small cap stocks, and international stocks didn’t experience nearly the same run up in the late 1990s, nor did they suffer the steep losses from 2000-2002 or the dreadful decade-long returns during the 2000s.  The hypothetical retired investor who opted for the diversified portfolio in 2000 fared much better—not only did they avoid running out of money, but by 2016 their portfolio had grown to over $1.7M!  They had almost double their starting value, net of withdrawals, during a 17-year period where the S&P 500 retiree ran out of money.  Extended to year-end 2019, the portfolio would have crossed the $2M mark even as withdrawals topped $76,000 per year (the effective withdrawal rate had dropped to 3.8% of the portfolio value)!

Can you retire on the S&P 500? It depends.  When you put all your investments into one asset class, whether that’s through an index fund (such as the S&P 500 or Total Stock Index), actively managed fund, or a selection of individual stocks that mirrors the index, you have a chance for exceptional returns.  The S&P 500, for example, had above-average gains in the 1960s, 1990s, and the 2010s.  If you retired with the S&P 500 in 1995 or 2010 you’ve done great.  But you also run the risk of disappointingly bad returns, which often come after the good times.  In the 1970s and 2000s, for example, the S&P 500 underperformed inflation.  Your retirement portfolio would have run out of money if you didn’t dramatically reduce your spending.

You need to ask yourself the question: Do you want to roll the dice with your hard-earned retirement savings, betting that the next decade will be another outstanding one for US large stocks?  The alternative is to own the S&P 500 for a part of your portfolio but diversify more broadly across asset classes.  Include small cap stocks, value stocks, and international stocks.  Yes, those asset classes have underperformed the S&P 500 in recent years, just as they did in the 1990s.  But if history is any guide, their relatively low correlation to the S&P 500 and low current valuations could be beneficial if historically-expensive US large cap stocks eventually stall out.  A globally diversified stock portfolio has shown remarkable retirement resiliency to support an ongoing, rising income stream over many decades, during bull markets and bear markets.